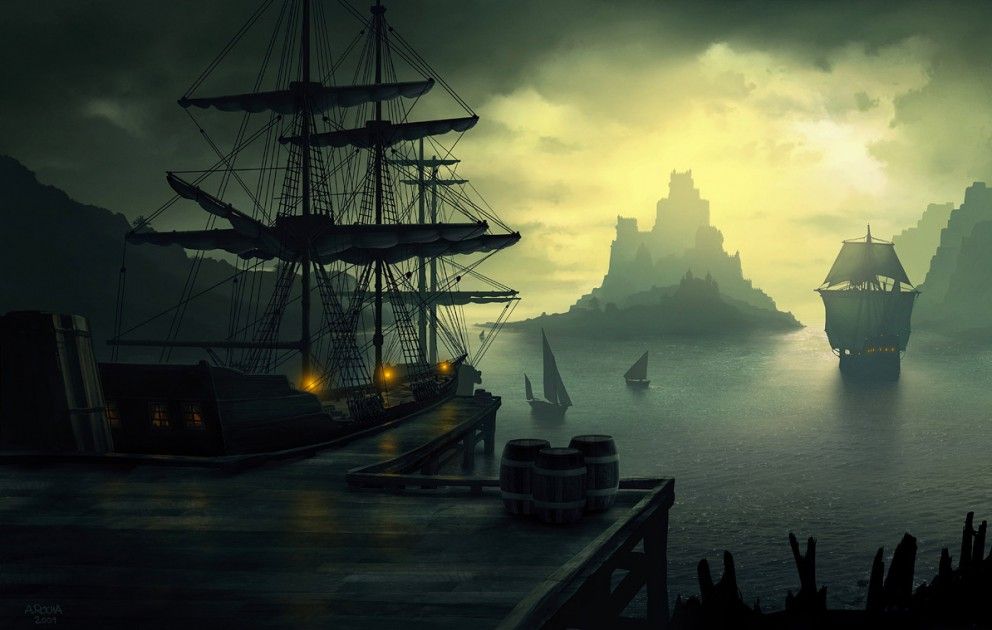 With the day decaying, the tides were coming in, helping the big vessels reach port and dock safely; it was a time for debauchery and merrymaking, many a brigand boasting of their foul deeds. Everyone who was anyone among the most renowned and feared pirates had finally arrived to celebrate a good season and waste away their ill-gotten goods that came from pillaging villages, ports, and merchants' ships.

One would think that matters would be business as usual in the kingdom and this port city, and its lower end tavern, but that was far from truth, as more ships arrived... the masters of the seas came to tavern to clash with their known long-standing rivals... not by means of arms as often was the case, but by means of daring bets and challenges, luck and brains rather than brawns. Though scuffles would likely happen when so many notorious pirates of their caliber met in such a small modest space, Dean Morgan's tavern

"Move yerself ye scallywags! Make way for capt'n Teach!" barked Blackbeard in his booming imposing voice.
Soon he too left his ship with his men and ventured into the tavern.

Another ship arrives at the port shortly after and it appears to be of little importance by comparison. Meanwhile, your character is peacefully enjoying a hearty meal by the docks with naught but the sea breeze for company.

Yet the stomping of boots and a deep voice breaks your character's thoughts and attracts your character's attention. Not so much because of the familiarity of said growling voice but because he was calling out your full name, out in the open, and judging by the tone, it was anything but friendly.

Will YC run for cover or confront the angry newly arrived patron over old standing debts?

Tusitala2017 Topic Starter
((OOC all characters are up for grabs: the grumpy pirate, the addressee, other tavern folk or sea folk coming to and from the tavern, towns guards... just reply OOC which position you would like and which character you intend to use for the post, if you wish to expand / explore ideas you can also PM))

- 3rd person past tense narrative (dialog in quotes "")
- No too OverPowered characters (nobody is invincible, fast and perfect, if your character is... it is not suited for this RP)
- No godmodding without prior permission (includes assuming/describing others' characters actions/perceptions/reactions)
- Human/humanoid characters - no furries sorry
- Appropriate characters for the Medieval Fantasy Pirates settings (taverns, maids, sailors, captains, guards, ambassadors, noble ladies, island natives, pirates, mermaids... )
- Read others responses carefully (ask via PM in case of doubt or suggestion for change)
- Be detailed and somewhat realistic in your characters actions
- Actions have consequences: positive and negative alike. If you attack a crew member, expect a beating, whipping, tossed down the brig! If you jump from a height... expect to fall and get hurt, if you get shot... expect an injury, if you fall into deep icy waters for too long without help, you could freeze/drown (except for mermaid assistance or similar characters)
- Be detailed enough in your replies that others understand what your characters are trying to say/do/achieve, what happens to them, how they feel or react, what they think or see
- Last but not least... think how you end your post for your partner! Can they reply to your post? how?
- In case of battles and altercations roll a 1d10 dice: (0-1) fail and (9-10) hit
- If you decide to drop out, please PM so we can talk out your character (died, exiled, on a journey...)

Niamh (played anonymously)
Lady Niamh was enjoying the relaxed cavern with her friends. She was a partly retired pirate that only occasionally set sail for various reasons if she wished. She was not rich or anything special. She had yet to collect her inheritance. But she decided to enjoy the sailing life. Until she could gain her inheritance she choose the life of a pirate and hang out with her crew. Suddenly she heard the annoying voice of Blackbeard himself. Niamh grumbled as she looked toward BlackBeard. She quickly realized it was her name he yelled out. “ Oh? Coming a bit late to collect? I thought you had forgotten the deal.” She teased. “I’m afraid I don’t have your money on hand. If you had come earlier I might of had it ready to go.” She said calmly as she looked at Blackbeard.

Niamh watched him carefully and with a completely unfazed look in her eyes. “ Say you help me find my dream treasure and I will give you about… 60% of it. That would be enough to pay you for your help and cover expenses and what I owed you before. Not a bad deal right? This treasure would make us rich and famous far beyond what you are now.” She said as she gave him a map as to prove she knew the way.. “ What do you say? If if fails to meet your standards I will pay your or join your crew until my debts paid in full.”
January 14, 2022 6:34pm

Siberia
(OOC: I'd like to play a ship's surgeon, staying at the tavern, who'd possibly join Blackbeard's crew? It'd be Mary Clarke from my characters)
January 15, 2022 5:23pm

Clearly she was as cunning and calculating... and yes... tempting too... as always. A pirate in her own right indeed.
Yet, on this occasion, his mind was already set and would not budge on the matter.
It was time for her to pay up and pay up in kind.

He smiled broadly with a toothy grin, letting the salty sea breeze mess with his hair and splash droplets of water upon their faces, holding his peace for a while, as though he was considering the proposal, folding the map in refusal and shaking his head negatively.

"Nay... I am not here for coin nor wealth... I have lost something.... something that to me... is far more important than treasure. Time is of essence though. Given your generous offer, I shall let you join my crew and work off your debt until it is settled, which... should you do your task well... it won't be long at all" explained Edward Teach

"What say you, do we have an accord?" asked Edward extending the hand to shake on the deal

You are on: Forums » Fantasy Roleplay » Time to pay up (pirates)(open)