What is OOC and IC?

OOC stands for Out Of Character, and refers to things that are meant to be read as you, the player, not your characters.

IC stands for IC, and refers to things that are meant to be read as being said (or actions performed by) a character. The player of the character may not share the same views as that of the character.

Generally, a RP may contain a combination of both IC posts and OOC chatter. To keep them clearly marked as separate and easily distinguishable from one another, follow this guide!

The easiest way to make sure that your posts are displayed as OOC is to wrap your post with double parenthesis, like this: ((Your post in here))

However, even if you omit the double parenthesis, there are other conditions under which your posts will be considered OOC:

When viewing a topic posted to an IC forum (ie "Fantasy RP," "Sci-Fi RP"), you will see a set of tabs at the top of the topic. You can choose to view all posts together, only IC posts, or only OOC posts.

When viewing "all" posts, the OOC chatter will be collapsed and darkened to de-emphasize it. Click or tap on these posts to expand them.

How do I prevent OOC chatter from being collapsed?

If you find this feature annoying, you can turn it off! Go to your account menu (shows as your name in the menu » Account Settings. Find the setting "Collapse OOC chatter in IC threads by default," uncheck that box, and then save your changes.

How do I get the All/IC/OOC tabs to work in an Inbox RP?

When viewing your Inbox conversation, find the option "Mark this conversation as IC" in the sidebar and click it. 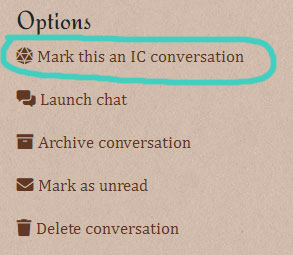 The conversation will gain the All/IC/OOC tabs and begin to work in the same way as a topic posted to an IC forum.

Since nearly every PM RP begins with back and forth messages from characters 'planning' the rp (even if it's just "Is this character okay?" or "Who goes first?") all posts made before someone in the conversation clicks "Mark this conversation as IC" will automatically be considered OOC. Evaluation for whether a post is IC or OOC does not begin until then.

HOWEVER! All hope is not lost. Once you hit "Mark this an IC conversation," a new option will appear just underneath for letting you edit which messages should be viewed as IC or OOC. 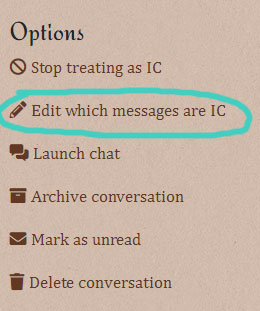 Just as with forum posts, you can generally only mark messages sent by characters as IC. However, in inbox conversations, an exception is made for messages sent by users before December 15th 2019 -- before this feature was added. This exception exists because it is not possible to retroactively edit old conversation messages in order to swap them to being sent by a character instead of a user.

You look really nice today. Are you doing something different with your hair?