This message goes out to my friends this includes all people I've roleplayed with I have had to depart for my own health. My mental stability took a turn for the worst. I will not be going into details. But if anyone wants to reconnect with me I must warn you I'm a little, off, and my memory is unstable at best.

There is so little to tell I guess. I am an avid writer and rplayer, in fact, I usually RP my characters to help my self-understand how they act. But either way, I'm always open to an RP, just message me please, though I might be a little slow to respond, sorry. And I don't know but if you want to see my writings I'd totally post some.
I also should note, I have limited time thanks to my job.
I only have a few characters listed but I have a ton and the following is a list and a quick description of each of my characters.
-A Time Traveler
-A man who traps evil spirits in a briefcase
-A psychotic murder
-An evil Jynn
-A monster that hides in a human
-more to be added as I have more time 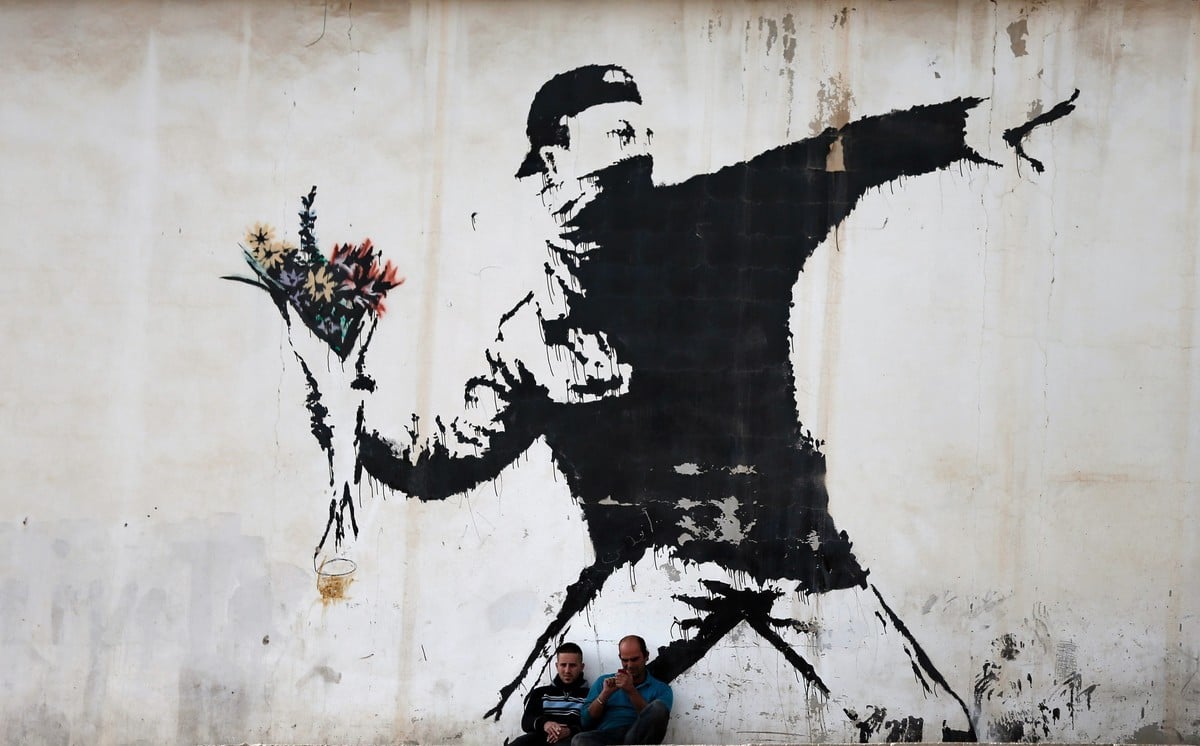 Banksy is got to be the ballsiest artist I've heard of if you haven't, THEN IT PROVES THAT THE GOVERNMENT IS SUPPRESSING THE TRUTH!!! No just kidding if you haven't then let me introduce you to a world of hilarious and deep art. One of his most famous pieces of works is this, a man throwing the flowers. Banksy is actually considered a criminal and has kept his identity secret to few for this exact reason. I pretty sure theirs a reward for his identity, I'll certainly pay to find out, but I think its cooler still to keep it a secret to his grave.

Favorite Web Sites:
https://tabletopaudio.com/
TableTopAudio is awesome, it has over a hundred epic sound bites that I use to inspire me. Pic a random clip and use the music as a prompt for practice writing.

Favorite Books:
Kite Runner
This a book you shouldn't read if you don't want to cry because it's very crying worthy. But it's very beautiful.


I love this song it's such a hyped song and try to think this way. That nothing is impossible, no it just a matter of time before my dreams, as long as I keep working towards it. So watch out world JP is on his way. HAHAHA


Best video game opening, and a VR game too. So nostalgic for the classic James Bond gig, and I love that singer's voice. And the games incredible.

Shannara chronicles was an MTV show, and I think now as of season 2 Showtimes problem. I got to say it's a nostalgic show I love, and can never wait for the next episode, and now a new season. By the way, its based on a pretty good book that I've yet to read.

West worlds a sifi beauty, what sifi is meant to be. And boy... do I love it. Originally an incredible book, then a pretty good movie sometime before 2000 with a brilliantly done villain who gave me the chills. And now we're not only got the show but the second season soon enough.

jpdelta
alright! so this kudos is a long time in the making. should have put it up here ages ago, but jpdelta is one awesome guy. we've been rping together for, will i don't know probably over a year and he really helped me figure out and establish who i wanted my character Mara to be back when she was just a little seedling of an idea in my head. totally fun an awesome to right with and yeah would recommend him to anyone. Glad we were about to stay in contacted when we switched over from RPG - ladywarth231992

jpdelta
While jpdelta and I have not roleplayed together, I can tell you that I admire him. The man does not give up, and he always strives to do better. He is willing to devote time and energy to anything that interests him, and not everyone does that, especially when it comes to a hobby such as writing. But he does. He really does go above and beyond. (Don't think I don't notice Qien Jiy still there

See all of jpdelta's kudos »

Inquiring minds want to know why we too should befriend jpdelta!