Time for a poetry break! These were the winning poems of this year's Epic Poetry competiton... The challenge was to write a poem detailing the history of one of our Epic Week Adventures!

Fire wrote:
off wE go into the nether
time travel? well, there's nothing better!

as a group of ladies, gents, and others
a band of roleplay-loving, sword-wielding brothers
(with equal credit to our sisters, fathers, friends, and mothers) --

we find ourselves lost in space,
amidst a harrowing, albeit two-bunned-horse race,
to slay tyrants and return home;

yet, we continue to find things gone
a l l wrong

to fill batteries with friendship
would take us all --
our wily bunch is sure to never let
our beloved rprepository fall!

lost in the land of internet(ia)
in this diverse, outta' this world area
we find our group Privy to a mass
of monster-ridden hysteria

there Is a castle in our sky
that you can see if you look high --
(or find the mythical error 404)
(which in this world lands quite the score!)

there is an epic gate
for Whose repair we must wait
to travel week-by-week
which, mind you, is quite a feat

because, as you can see,
to return to our great 2.0 reverie
we must uncover a cornucopia of mystEry
mixed with a touch of rpr history

we fight some foes that we have seen
and some who, directly into, we careen
we even have the well-met aide
rpr mascots come to save the day

we are the keepers of the light
never to let rprEpository fall into night
we are sure to cleanse this blight
and soar, and soar to such new heights


the most epic weeKs,
(of all the weeks)
we come to the end of a grandoise feat
now once again we take our seats

for now, ta ta, goodbye, farewell
it's been lovely, fun, and oh-so swell
on this note i wish you well
do not forget your own story to tell

with love, and adventure

(ps: let us see if you can find
the hidden message within this rhyme
and if you do i bid to you
the happiest, of happy bon adieus ~)

HibariHaru013 wrote:
My poetry is kinda rusty, but I tried. YEY!

So here's my submission...

It is about 2016's Epic Week since I was a little more active during that time. I'd also like to present my poem as a concrete poetry. That's why I asked if I could also submit it as an image before. Hihi... Let's see if you can identify the figure that is being formed.

Anyway, if you can't read it through how it is presented, don't worry! The text version is included below! It is exactly 275 words. 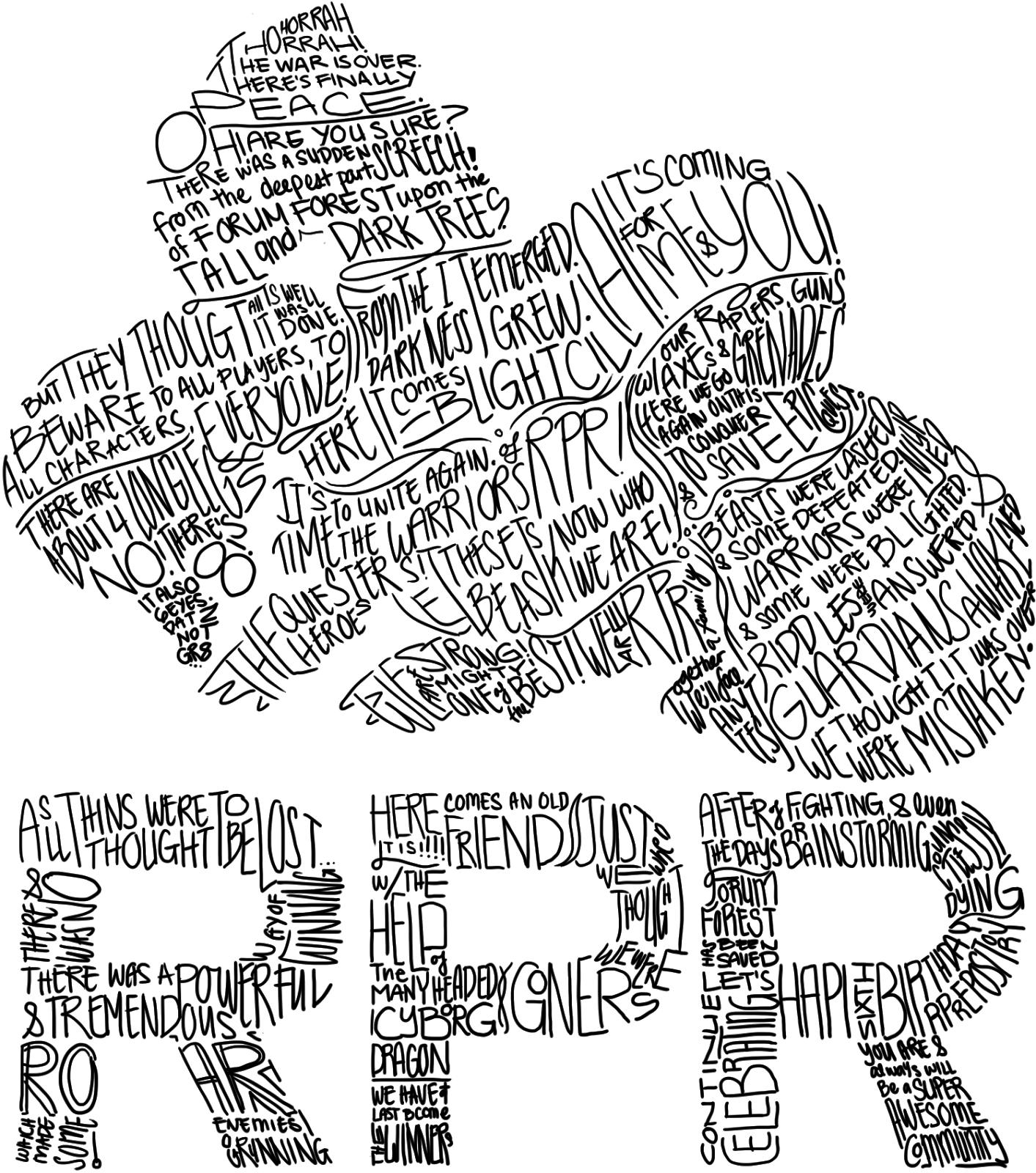 My Poem: EPIC WEEK 2016
Horrah! Horrah!
The heroes are free!
The war is over.
There’s finally peace…

Oh! Are you sure?
There was a sudden screech…
from the deepest part of Forum Forest
among the tall and dark trees…

They thought all was well.
They thought it was done,
but beware to all players,
characters, to everyone!

There are legs so long…
about four…NO! There’s eighth!
It also has six eyes.
That doesn’t sound great!

It’s time to unite again!
The warriors of RPR!
The questers, the heroes!
Let these beasts know who we are!

We are the strong. We are the mighty…
We are one of the best!
We are RRR—a family!
Together, we will face any test…

With our rapiers, our guns,
our axes, and grenades…
here we go again on this epic quest
to conquer and to save…

Beasts were lashed and some defeated.
Warriors were injured and some were blighted…
Riddles were answered and guardians awakened.
We thought it was over. We were mistaken...

As all things were thought to be lost,
and there was no way of winning…
there was a powerful and tremendous ROAR!
which made some enemies go running!

Here it is! Here comes an old friend…
just when we thought we were goners.
With the help of the many headed cyborg dragon,
we have at last become the winners!

After days of fighting, brainstorming,
and even countlessly dying…
Forum Forest has been saved!
So, let’s continue celebrating!

Happy Happy Birthday,
dear RPRepository!
You are and always will be
a super awesome community!

The site was whispering in soft susurration
all expecting the arrival of the greatest feast
despite all the joy, there was tense trepidation
that such a large cake would lure out a monstruous beast

The vanguard was grouped and ready to hit with force
Discord brought accord to hit the strongest ones first
others supplied us through the coarsest Doubbutt course
together as one, those foes, we punched, shot, axed, pierced

When we thought we had won, we were so very wrong
the Imperial Xenobeast made a shocking return
mounted in its new dino it became far too strong
luckily cyborg dragon also took its turn

By the end of the week and with the portal repaired
the batteries charged since we fulfilled all those quests
the monsters were gone, either were dead or had fled
we celebrated with all our friends and guests

We were victorious by working in unity
and our profiles now we have a new accolade
Happy 10th Birthday RPR community
Let's share the contests' RPR swag that we made
Next: Friday RP Prompt » « Previous: Collaborative OC Building Event

Awesooome!!! Thanks guys! Great ballads, there. 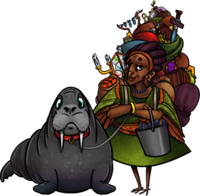