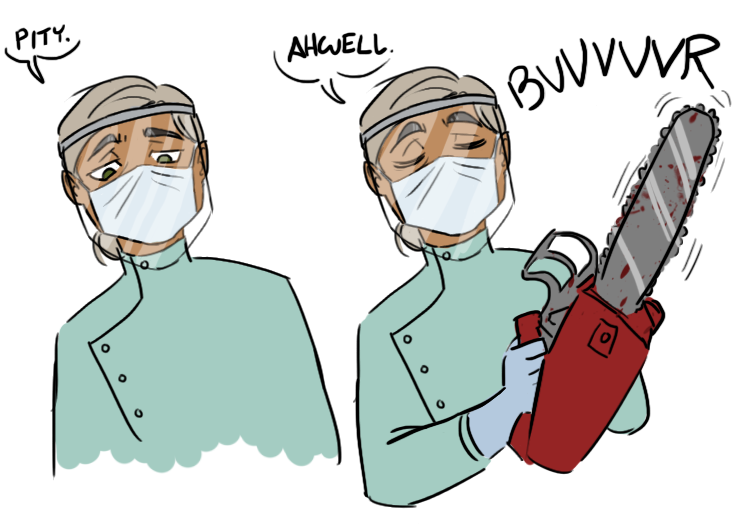 vv
Quote:
A quiet "Understood," before Cecille left the call. They moved on to begin preparations, reorganizing their tools with an excited agitation. "We should likely talk after this. I've updates," speaking casually to the grey droid, they idly went through scrubbing procedures with the monotony of someone who'd done it countless times before. Prepped in gloves, a mask and a plastic face-shield, so that things could start immediately once Sunehri arrived.

They accepted her into the large, open loading/medical bay of the shuttle, more than spacious enough to accommodate Taniks' bulk. "Of course—I've a scanner ready." They approached the Eliksni slowly, gesturing where to set him down, but politely refrained from hovering while she did her final deed. They did look on with some interest, unmoving at the sound of the energy blade striking true. Once it was done, they stepped in closer, taking a brief scan to confirm and record his time of death (which they called aloud, as was the nature of doctors) before tapping their commlink and activating the eye-piece. A six-minute countdown began.

Hands reached to assist in getting him up onto the table, carefully positioning him face-down for better access to the back of his head and spinal column. After walking away to roll closer the trolley of medical tools, they returned to stand over him in a moment of quiet. Above their surgical mask, there was a keen flicker in the otherwise cold look of their sleepy hazel eyes. A final, "of course" as Sunehri swept out of the room and left them to it.

"Pity. He is such a superbly chaotic patchwork of cybernetics and organics; this body will be sorely missed." They paused, as if to give the dead Eliksni a moment of silence following this touching eulogy—but with an utter lack of tact, they broke it with the sudden 'bzzzzzrrr' of the intimidating rotary bonesaw they'd just picked up, held aloft but confidently in one hand. "Ah well. Shall we?" Poor Argema was stuck in a one-sided conversation. With Sunehri not sticking around, there was no one to warn about the hazards of inhaling bone-dust, but they activated the forcefield alongside the sterilization field anyhow, to keep it contained. A mask protected themselves, the plastic clear face shield there to prevent dust and fragments from hitting them in the face. They didn't think they needed to warn Argema out of the field—he had a good habit of staying well out of their way when they were working.

Hi. I'm a socially anxious wreck and painfully shy. If I've promised something, please give me a poke, I may have forgotten. I am an unreliable narrator, especially when playing deceptive characters. I won't outright lie, but may imply or suggest things through narration.

I enjoy playing science-based characters, even in fantasy. Anything that throws me into research. Especially of the Mad Science variety. Unhinged cyberneticists, and delightfully hands-on experimental necromancers; I don't seek out gore, but it comes a bit with the territory. Please let me know your limits on gore and body-horror so I don't cross them.

I also almost exclusively RP on Furc/Discord in continuities and groups, and don't do unsolicited 1v1s, sorry.

I'm a professional tea taster and blender as my day job. Ask me about tea.
**Main is currently Cecille. My sleepy non-binary cyberdoc.

I also run a revival of a 2011 RP. It's currently closed to new members until reconstruction is complete and things get underway.


🙤
A White Rose, and a Cup Of Tea From Ave

AJ_89
This guy made an amazing trick or treat topic that really added detail to a colorful, substantial Halloween celebration. A genteel character, a polite and considerate RP style, very sly humor, nicely written scenes. A delight to RP with. Thanks, sirrah! - Shinyrainbowlithogra

AJ_89
AJ is one of the most brilliant storytellers I know, exceptionally patient with slow-burn plots that I have come to appreciate so much. AJ has helped give life to a world that I'm in awe to be a part of, cleverly molding fantastic areas, places, and events that make me believe they actually exist, or is happening. AJ is such a gem in our community. I hope to be half the outstanding storyteller they are some day! Creative ideas Wonderful writer - Avelithe

Inquiring minds want to know why we too should befriend AJ_89!