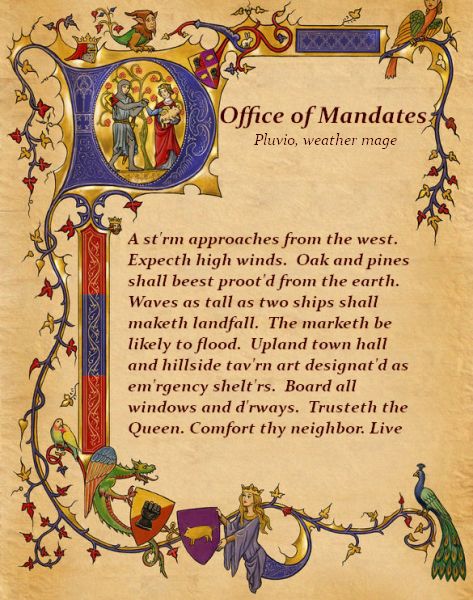 The traveling entertainer looked up from the colorful parchment to the sky. Clouds on the horizon seemed to only be getting darker and darker. Even in the short time since he moved from deep in the center of town below, up along the hilly trail, he'd felt the wind speed increase. The trail winded ahead, curving up along a fairly steep mountain. Switchbacks and hillside walkways kept the elevation change gradual.

A look downwards showed the town below. It was in pandemonium. Most people had left the area to head deeper inland. Not everybody has had time to evacuate. Some have nowhere else to go. Officials urged all citizens to head to two safehouses on high ground.

The tavern was across a valley from the town hall. The latter had been designed as an emergency gathering on high ground in case of emergency. Nobody had expected the storm that was building to occur. A powerful weather mage named Pluvio was alerted to the storm by powerful equipment and his powers of intuition. Giving the town advance warning of the impending disaster may have been his biggest accomplishment thus far.

Not even Pluvio's magic could protect the town from the impending disaster. Since most of the town was in a natural harbor, much of it would be washed away. On the other side of the town from the two mountains was the coastline. Even the farms and ranches between the valleys were in severe danger of flood and wind damage. The harbor was packed with ships that would normally be at sea. Waves more rocky than those seen in the last 75 years were already battering the sea a few dozen miles from the coast.

There was only a day left until the storm made landfall. People have been preparing for several days

The bard turned to look up along the mountain's side. The trail walked straight along the mountain's side, turned in the other direction in a climb and then went straight in a slight ascent. This would lead to another switchback and gentle ascent. Enall followed the maze to the tavern above. The dark shape carved out of red rocks stood behind tall columns. The entire shape looked as if carved from the mountain itself. Grand windows would have given a view out over the harbor and town below. Now they were boarded, save for a few round reinforced portholes.

The Moon Elf imagined huddled citizens crowded behind the few small peepholes which looked out at the sky. The entire populace would be affected by the 'Storm of the Century'. Even the farms and meadows would be met with the rising sea.

Enall burst open the large wooden door of the tavern. "Fear not, good citizens. For I shall provide you the gift of music.... In these troubling times." He spoke loud for effect, hoping for a roaring welcome. The truth was that nobody really seemed to notice. The scene was as destitute as he thought it would be.

People were gathered inside of the bar, which was more spacious than it's horizontal façade may have represented. It was cut back deep into the mountain, stretching back into what looked like a long, dim hall. Wall torches, lit chandeliers and candles flickering on every table gave the room a crimson-gold glow.

Impending doom didn't stop the drinks from flowing. The timing couldn't be better for the tavern, as they recently restocked. Facing away from the door and town, a long wooden bar stretched along the left side of the room. In the middle of the room were three rows of small tables, many of which were full. The bustle of conversation created a hum in the closed space.

A space to the right of the tables caught Enall's attention. It was a stage. He just walked in. The time wasn't right to start playing tunes yet. The prospect of doing so caused excitement to rise slowly in the bard's soul. Patience, he thought to himself. As he looked out at the crowd, he couldn't help but smile. At his side was a large satchel and a stringed instrument he called a songweaver.

His nimble elven fingers struck a few chords. The instrument was made with two shades of wood from a sacred tree. It was believed to have special powers, including the ability to provide relaxation or comfort. The gentle flow of notes cut through every conversation in the tavern until things had quieted slightly.

"I just wanted to say", the moon elf said loudly. "Coastalmoore will make it through the difficulty ahead." He paused and turned to make eye contact with as many people as he could. "We will weather the storm!"

"Buy this man a drink", shouted a voice from deep in the pub's dark corners. Enall laughed quietly to himself and walked towards the bar and it's dark wooden counter. There were a wide array of various barkeeps and servers moving about the place. Drinks ranging from ale and wine to dwarven mead were flying out of the pub's coffers.

There was also a wide range of food available, with farmers and ranchers pooling resources for both safehouses.
====


Rules
-Only 4 players total at one time. I'll update the open/closed status in the title according to this.
-You don't have to start by arriving at the bar. My opening post estabished that the bar was full. As we get closer to the storm, posting an arrival may not work well.
-Use NPCs. This doesn't mean one has to ignore player characters. It's more about noticing others in the background.
-I will DM the storm. Characters can see their home or a sight they're familiar with from a viewing spot in the pub. As the storm hits, people can describe what happens to their home/business/favorite hangout based on storm emotes.
-Feel free to spin this off into future 1v1 RP.
-Improvise. Create. Have fun. Everybody is welcome to help build the world.
====

You are on: Forums » Fantasy Roleplay » Weather The Storm (closed)