Originally started as Asexuality Awareness Week, Ace Week is a time to spread awareness and understanding of asexuality, as well as just some extra time to show of some ace pride!

Asexuality in this context is a sexual orientation, much like heterosexuality, homosexuality, bisexuality, pansexuality, etc. The difference is that while all of those clue you in to which direction they point, asexuality has no direction. It is defined by a lack (or near-lack) of sexual attraction. Asexuality is a spectrum that additionally includes an assortment of grey-aces, who only rarely or only under specific circumstances experience sexual attraction, and demisexuals, who specifically need a strong bond with a person before they can feel sexual attraction.

Asexuality is not a lack of libido or sex drive, though there certainly are aces who also lack that. Many aces may still choose to engage in sex for one reason or another. However, those who do not want to should absolutely be respected.

Asexuality is not a lack of interest in romantic relationships. Most aces still love romance and very much want to date and even marry! Aces will frequently specify their romantic orientation in similar terms that others use for sexual orientation (homoromantic, biromantic, etc). There are some who are additionally aromantic though; aromantics lack romantic attraction, but may or may not still experience sexual attraction.

I'd like to open this thread to two things:

First: Aces, of course! If you are a-spec (aros welcome too!), feel free to identify yourself, tell us a little relevant story, whatever you feel comfortable doing. You don't have to do anything if you don't want to!

Second: Ace or no, I'm willing to try answering questions you might have about asexuality. I'm only one person, obviously, but I will try to give a well-rounded answer. (I might be too lazy to bring up references unless they are needed though, sorry!) Other aces may also answer, but please do not ask anyone a direct question if they have not agreed to give answers! You're encouraged to post your questions here, but if you're wanting privacy, I'm okay with receiving it via PM.

Thanks. Have a great week!

Beautiful week it is. 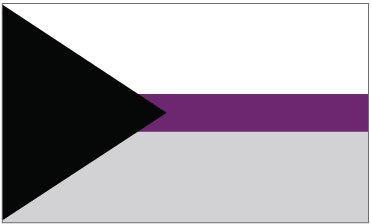 I used to think I was straight up 100% asexual, mainly because that was the only term I knew and it was frankly just easy to tell people I was asexual. Sometimes I still feel like it would be. In my experience people seem more willing to understand and not pester me when I just say I'm asexual, versus when I say I'm specifically demisexual which is on the asexual spectrum. Then they want me to explain, want me to tell them how that's different from just not sleeping with someone 'until you love them.'

So over the last few years that I have started to label myself as demisexual biromantic, it evolved to demisexual/bisexual.

In person I don't usually tell all people I am demisexual, but rather bisexual, because I've decided it's not really their business how/when/under what circumstances I'm sexually attracted to people if they aren't someone I'm interested in dating.

I've also spent a lot of time over the years thinking about how the whole asexual spectrum labels and what not, like demisexual and greysexual specifically even, wouldn't even need to exist if people just took 'no' for an answer.

But that's the case with all labels really, the reason labels exist is because of people having 'explain' themselves instead of being able to just live.


Regardless, I am super grateful to know so many other asexual spectrum people, most of my closest friends are demisexual or on the ace spectrum in general.

Sanne Moderator
I appreciate this thread and hope it helps others out a bunch!

PenguinColada
I absolutely love that this is being highlighted and I appreciate you for making this thread.