koobler
This character’s initial concept came around when I first rediscovered a game from my childhood. I took a lot of aspects of one of the character’s designs and also I took away and added from it to create this lovely specimen… At the time, I was also really into FFXIV (I still am), and Shadowbringers really brought out the desire to make a similar story where the “light/good side” is actually not as cool and hip as you’d think.

What really inspired me most to make this character is that expansion’s concept, so thanks for making me cry, square…

At first, when I made this character back in January of last year, I had a very rough idea of what the story was going to be about, but I knew I wanted it to be a really scary portrayal of religion and fanaticism, teetering balance of right/wrong, finding truth behind set expectations and looking past a façade, etc. 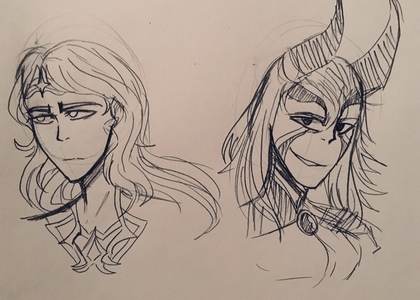 (I think this is the first time I doodled the two main deities, the demonic looking one has changed a lot when I started fleshing it all out.)


Then, it was all a matter of finalizing everything surrounding Eosphoros. Where exactly did they come from? Why were they “evil”? Why were they so hellbent on rewriting the world? I started with their origins of being a formless being that can be recognized by a single trait, so you know when they change forms, you know exactly what you’re dealing with. So I decided that wings were the way to go. I made a really simple connection between angels and light, but I changed the normal feathery thing to something more visually unique. I decided on something more ghostly/ethereal to really sell the whole otherworldly and unknown vibe that I wanted the character to have. No one really knows exactly why they’re here and no one really knows exactly what they are. But hey, angel wings, so that must count for something good right? 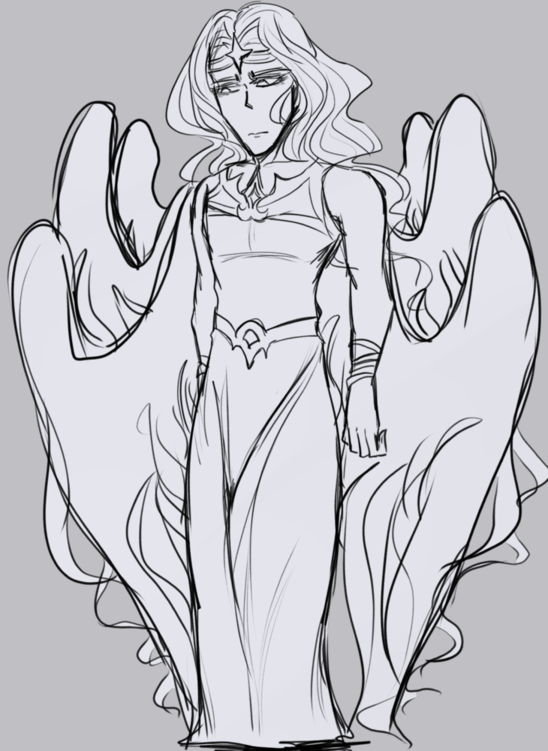 (A rough sketch of Eosphoros, circa. a long time ago.)

Now Eosphoros wasn’t born looking all beautiful, Grecian god right from the start. For what I was going for, it wouldn’t make much sense. The world that I was building, the sort of otherworldly presence or omnipresence that had made Eosphoros, wasn't trying to make them like that from the start. It just wanted to achieve the goal of wiping out the people that were upsetting the balance. So I had to come up with a way to bridge the gap between a formless, ghostly being to what we have at the present (vogue model, yes I know lol).

I don’t know exactly where I got the idea from, but if you’re a Dragon Ball Z fan like I am, you can draw parallels to Cell. Absorbing people and becoming more “perfect” in a sense. In this case there is less ego involved and more of a survival/adaptation deal. So from formless, it goes to be more human looking, then, after consuming a good amount of deities (nearing a hundred, maybe - minor or major), we are where we are today. 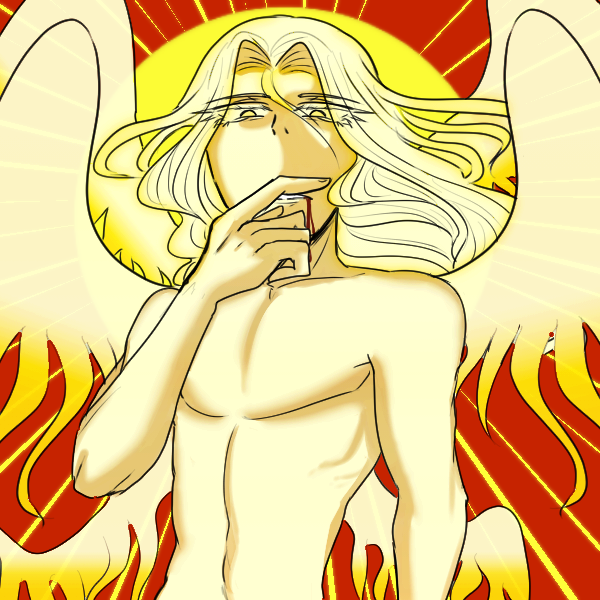 (Not entirely sure how many gods, goddesses, and deities had to die to get this far. I’d like to think that depending on the strength of said deity/how many followers they have makes a significant difference from a lesser known deity.)
From that point on, I knew I wanted a design that appealed to the masses, because how can you be the savior of the world if you don’t look the part? A lot of Eosphoros’ followers consider him to be what humanity strives to be. I drew some connections to the relationship between the depiction of Greek gods and things of that nature. Larger than life. But where Greeks had a more grounded vision of their gods, Eosphoros is straight up just better than you in every way. In the religion that was created for him, he is the role model. But even if he is a superior being, he still cares about you and your troubles, and wants to save you from disgrace and sinfulness (this sounds really familiar).

I took a whole bunch of queues from angelic imagery, from the rays of light, the outstretched hands and just the real sense of holier than thou. I wanted to capture softness and comfort, but at the same time, I also wanted to put across the fact that Eosphoros really is just an emotionless creature born of the desperation of the world to keep its balance in check. I give his expression a kind of serious, cold one, which contrasts a lot of his feminine features. White is considered the symbol for purity. Gold represents wisdom, which a lot of his followers point to in the scriptures about him. The gold was mostly incorporated to sell the angelic-ness in his design (also, very vaguely inspired by some depictions of Greek gods). Notice the circlet and how it has multiple colors, like stained glass? It could be a hint of some of the powers he’s gotten from… you know. Chomp chomp. The hair color was a no brainer to keep the design consistent. Blonde hair is used in a lot of protagonist designs. I like to think it represents the noble hero, which I guess if you spin this story in another way, you could say that Eosphoros is the noble hero (but he’s going about it all wrong to be honest). I decided to go for 6 wings, sort of gold and transparent to fit in with the color scheme, with a sort of wispy effect happening at the tips of the “feathers” to hint at his origins. There isn’t much to say about the outfit, other than the simplicity and the kind of complicated and intricate gold parts of the robe/dress is pointing to the portrayal of some angels. Shoes aren’t included. 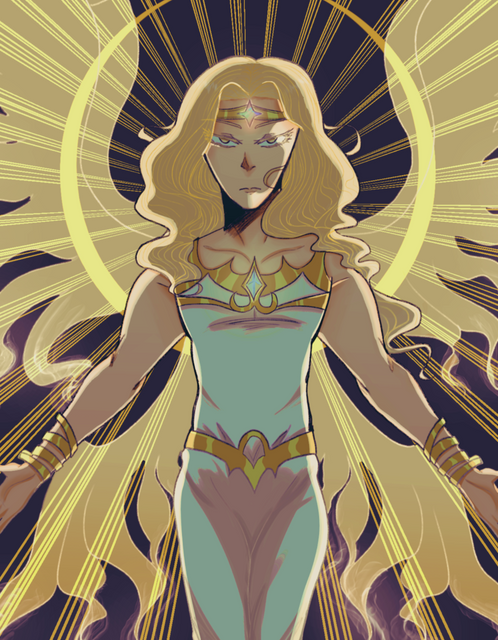 (The main art I use for him. I’m still really proud of this piece, even though it’s kind of simple in the composition. I wanted some art that captured more of the essence of what Eosphoros is and has some elements of religious art that I thought about implementing into art of him in the future.)

I think that’s all I have to weigh in on this! If you’ve read this far, thank you so much for dropping in! I wanted to come back to the RPR community and introduce my wacky and weird headspace with all of you. If we’ve talked a while back, good to see you again. If you’re new, nice to meet you!

Do you have any thoughts or comments or questions about this character? Please let me know if you do. I’m planning on doing this with a lot of characters, starting with the ones that have profiles here. Hopefully I can inspire some others to make some awesome characters or write some stories or plots! Cheers!!

sland
This is fantastic, the sword-and-sandals aesthetic is great and I wish everyone shared this much about their characters. Hope you've had a lot of fun writing him.

You are on: Forums » Art & Creativity » koobler's character insights: Eosphoros