Duàn Xiu (played by horangi)
It was so late at night and yet Duàn was still wide awake with his glass of wine in hand while he sat at the bar of his kitchen. Why was he awake at this hour? Because he had a sickly feeling that someone - or more than one - would come to his door for a silly request, but of course he wouldn’t know what kind of request it would be so the only thing he could do was sit and wait. 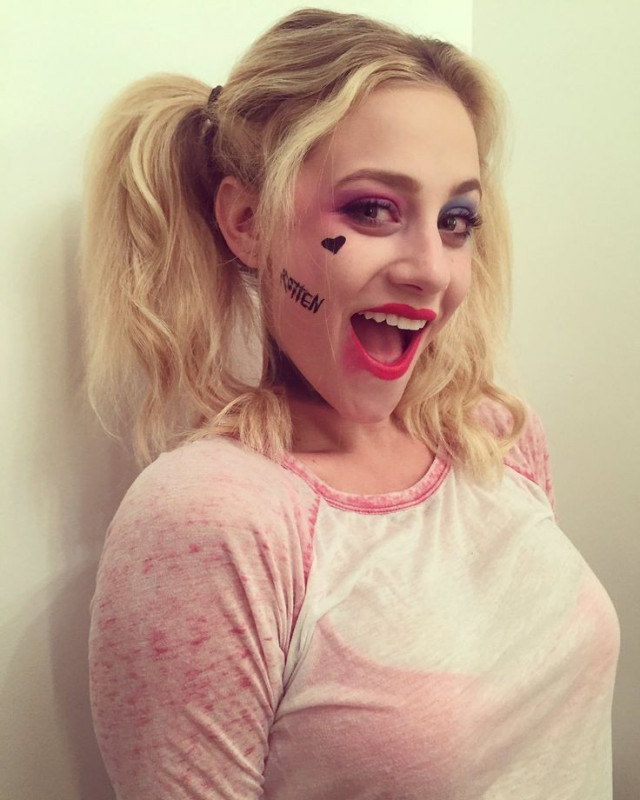 Meg was a little unsure of her next stop. The house wasn't decorated for Halloween, but that didn't mean whoever lived there wasn't taking part.

Worst case, the owner didn't answer. She made her way to the door and gave a sharp knock. Then, she stepped back and waited.
October 22, 2021 5:58pm

Duàn Xiu (played by horangi) Topic Starter
Hearing the knock, he was quite surprised that his suspicion was proven correct. Duàn stood up with his glass of red wine and took his time in walking to the door, opening it and cocked a brow at the sight of the woman that was dressed up, “I’m not interested in Girl Scout cookies.”
October 22, 2021 6:10pm

Megan King (played by AgentMilkshake)
Meg was ready to say "Trick or treat" but was caught off guard by the man's response when he opened the door. Was he joking or not taking part? Thinking fast, Meg decided to go with her Harley Quinn schtick. "I ain't no goil scout," she said in a mock-Brooklyn accent. "I'm here for ya loot! By loot, I mean ya candy, if yer handin' any out that is." She gave him a big grin, smacked her gum, and blew a huge bubble waiting to see if her host was participating in Halloween. While she waited for an answer, she was frantically thinking about how to handle things if he wasn't.
October 22, 2021 6:15pm

Duàn Xiu (played by horangi) Topic Starter
Questioning the whole outfit, he then glanced at her face again when he heard her speak in an odd accent, “candy?” he scoffed before stepping aside to grab a handful of peppermints, placing them in the bag that the woman was holding, “People still do this damn Halloween thing, huh?”
October 22, 2021 6:25pm

Megan King (played by AgentMilkshake)
"Apparentltly so," Meg said as some peppermints were stuffed in her treat bag. If this guy was playing a character, Meg wasn't quite getting it. He seemed to be genuinely annoyed. "Well, thanks for the treats! Hava good night!"

Duàn Xiu (played by horangi) Topic Starter
He exhaled briefly and leaned against the doorway as he watched the other turn away, “Mm.” He hummed in response to her words, stepping back and shutting the door to return to his warm couch, sipping his wine.
October 22, 2021 6:34pm

Megan King (played by AgentMilkshake)
Not quite sure what to think, Meg gave a polite wave after he hummed in reply and headed down the sidewalk. She heard the door shut a moment later. Oh well, on to the next house!
October 25, 2021 4:59pm

The Snail (played by Kim)
POOOF! A massive mushroom cloud of yellowish smoke erupted in the middle of the kitchen. Given the lack of indoor wind, the musty-smelling smoke is slow to clear, but when it finally parts enough to see again a strange creature is revealed: a garden variety snail, not quite three feet high at the top of its shell.

Duàn Xiu (played by horangi) Topic Starter
“What the hell-“ He looked over at the snail that was in the kitchen, “how did you even get in here- get out.” He frowned and pointed at the door, “don’t make me pour salt on you, slug.” He threatened though his expression remains blank.
October 26, 2021 9:47pm

The Snail (played by Kim)
"I don't know," the snail responded in slow, thoughtful tones to the initial inquiry about how it got there. But its tone changed completely when salt was brought into the conversation, and with a SPLORT sound, it withdrew halfway into its shell, eyes going wide. "You shouldn't put salt on slugs," it gurgled out, appearing to not quite understand that slug was being used as a name for itself. "Slugs feel pain too. They've told me."
October 29, 2021 8:04am

Duàn Xiu (played by horangi) Topic Starter
Duàn raised a brow and crossed his arms, staring at the snail with glowing red eyes, “I was talking about you. And if you don’t know why you’re here then I suggest you leave.” He spoke in a warning tone, picking up a container of salt and walked closer to the snail, “you’re lucky enough that I haven’t salted you already.”
November 1, 2021 10:01pm

The Snail (played by Kim)
The snail wailed in dismay, withdrawing all the way into its shell for protection.

A sneeze echoes out from within the shell, and just as abruptly as it appeared, it disappears into another column of smoke.

You are on: Forums » Fantasy Roleplay » Trick or Treat: Duàn’s Mansion