bashthenerd
I've Noticed on all of my roleplaying sites and apps there is a character that is sadly not used for roleplay in roleplay, even as a face claim for an OC, Titania from The Ancient Magus Bride. So I would like to make a roleplay with someone using her, or just someone using an OC with her being a face claim. I will be willing to roleplay almost any character in return since it is only faIr that i at least do a character you want.
Magic 80%
Magic is common.
Technology 50%
Modern
Combat 50%
Combat is expected as part of the storyline but it won't dominate the plot.
Romance 70%
Romance is required, but may take some time to develop. For example: slow burn RPs.

bashthenerd
Here is a picture of her Btw 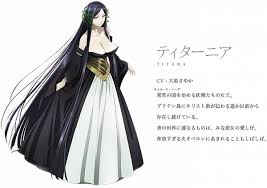 ForeverDreamer
I'm not familiar with the anime, according to the previous poster stating it, but I would be interested in RP'ing if you're interested in a free-building RP. My characters Vermillion and Jonathan would be perfect for the likely Medieval Fantasy build.

ForeverDreamer
Still trying to get in touch with you concerning our RP.
January 21, 2019 8:03pm

Roxy_FNAF
I'm interested in this but I have never seen the anime. Would any of my characters work in any way with her?
June 19, 2019 6:09am

Michael147
Not familiar with the character, but I can give it a try if you are open.

You are on: Forums » Looking for RP » Titania RP (closed)