Torag1000
Hello there. Thank you for taking the time to read this. I appreciate it. It's going to be a long one though. I've written this to the best of my ability. So... here we go.

Looking for an RP where I can and will use both of my main characters, the siblings Hadrian Horatius Mauritius and Elsbeth Horatia Mauritia. They’re both characters main POVs that I have created for currently WIP world called ‘The Sheol’. Here is the map, currently a WIP: 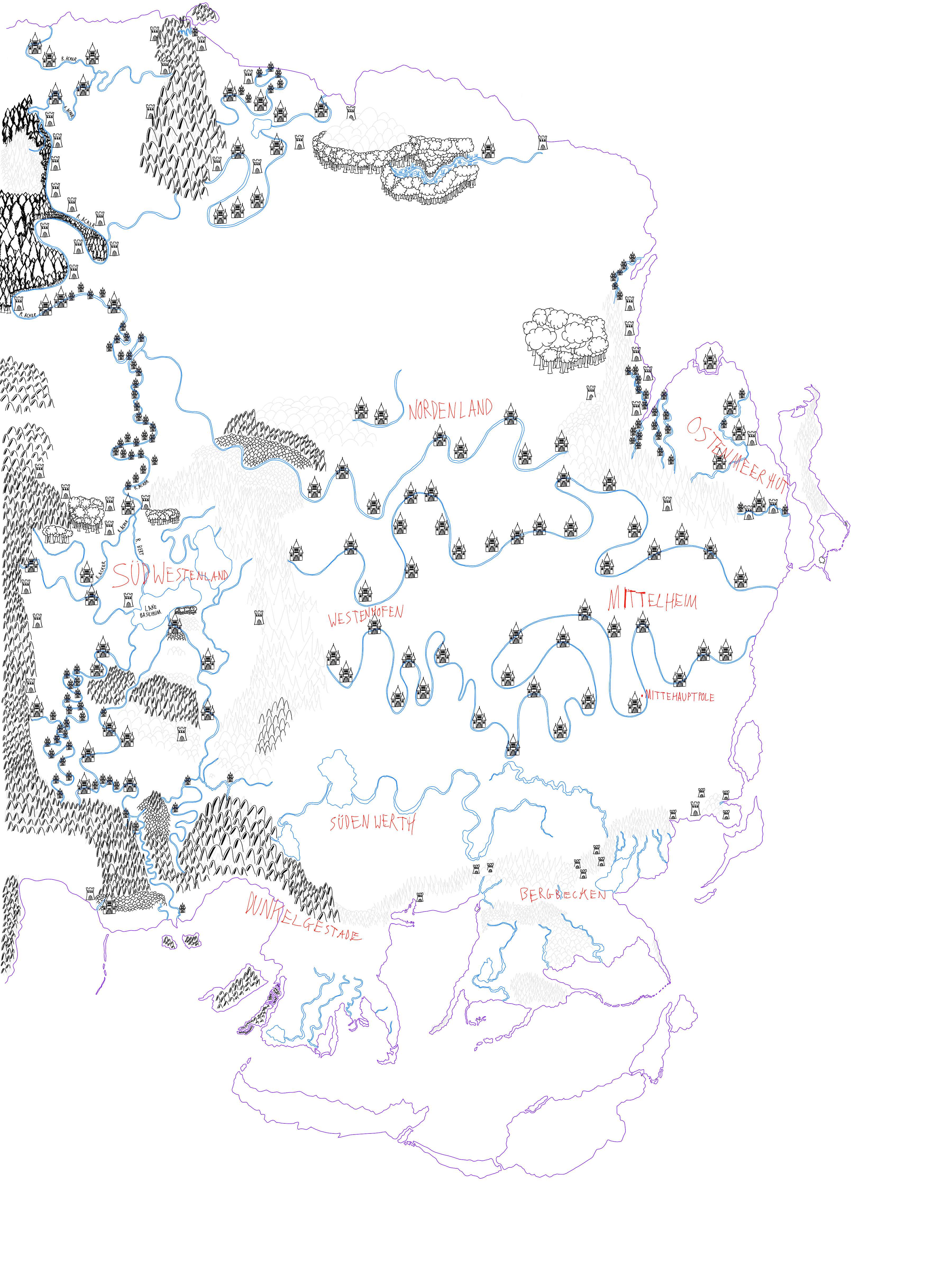 To summarize the two of them, they are both siblings and minor princely nobles born from the previous Emperor and from a concubine. They are from a branch family of the Horatian dynasty that rule an Empire called the Emrigothan Empire. Currently, the sister Elsbeth rules from a Principality called the Principality of Südwestenland, while his brother is either serving as her adventurous vassal as a Duke of the Duchy of Salzhurst, or is currently exiled from the Empire and is found within the unknown western lands that the Empire only have brief collections of vague information. Elsbeth is a main character but I mainly play as Hadrian in my RPs as he is my main and preferred character. Elsbeth is part of the RP though. Here are some RP prompts for him:

- Hadrian is no longer one of the minor princes in the Emrigothan Empire and was an outlaw and on the run, ever since he had murdered his father and the Grand Prince in cold blood. He has since become a Knight-Errant (one can also call him a Hedge Knight as well), a landless and masterless knight, poor and always on the move, taking any jobs both shady, legit, dangerous, and safe. This often includes fetch chores, defending trading caravans and supply wagons, defeating bandits, murder of nobility, fighting monster infestations and monster and pest problems, etc etc. Anything to earn coin for himself. - He needs either a squire or a companion to help him and accompany him wherever he goes. Eventually they will come back to the Emrigothan Empire. Your Y/C can be that squire or companion.

- A subset to this RP request prompt is that he can be found in your Y/C’s world or country, and he can possibly team up with them. Leads to some interesting scenarios. For an example, Hadrian became a pirate, serving a pirate captain and her crew, fighting as her champion and training her crew for swordplay mostly for discipline since most pirate crews are not so battle-hardened or ready for fights.

- He eventually comes back to the Empire, and pardoned, but must atone for his actions, and so has come to serve under Elsbeth, his younger sister and the Princess-Elector of the Principality of Südwestenland. He would need someone to assist him as his right hand man or woman. Your Y/C can be that person.

- Another subset to this RP prompt is that he can be a subordinate to Y/C. Either they are a ruler or something else entirely, like the previous pirate captain I mentioned in an old RP of mine with someone. The RP prompts are part of the various states in his life that he goes through to develop himself as a person.

- Or we can do your RP prompt or if you have any other ideas, please tell me. I would like to hear it.

All good so far? I hope I don’t overwhelm you with much information all at once. I have some rules though:

- I don’t mind the post length, but give me something to work with. I don’t really like one liners either. There was one who gave me this as a response: ‘groans’. I don’t like one word responses either. I will forgive it if it comes to dialogue. Dialogue is something that cannot just be posted all at once because responses and talking can be quite jarring and forcing one of us to just conform to how the dialogue is set. I hope I’m making sense. Basically, just give me something to work with and take our time with dialogue.

- I will adjust my length of posts to your liking if you feel that you cannot continue with long lines and paragraphs.

- I would appreciate it if you can try to put in a similar effort as me. I don’t want to be the only one that pulls the plot along. Don’t be too passive, is what I’m trying to say. And if you’re not trying, I might be able to tell.

- I would like it if the person can respond at least once a day, once every few days, or once a week. Any further and that would make me wonder what’s up. If you are having trouble, please tell me. I’m very understanding. Don’t just ghost on me. We all have busy lives. RPing comes last. Our own lives outside of RPR comes first after all.

- If you are getting bored of the RP, tell me so we can end it peacefully. I would rather we avoid not speaking to each other for a long time and me getting anxious and wondering what did I do wrong. I dislike it if the person ghosts on me.

- Another thing is that I would prefer if the character is depicted in being drawn, like I have done with Hadrian and Elsbeth, not with real life models. I will make an exception though, if I think the character is well made.

- No Mary Sues or Gary Stus. Basically they're characters with perfect qualities and traits, with no weaknesses or flaws that make them relatable and human. Basically they're god level humans who have no faults or flaws whatsoever. The best example I can give of this is Rey from the new Star Wars trilogy, who is a complete Mary Sue and terribly written character.

- No fandoms. I simply don’t RP in that type of genre. This also includes characters from another established series. I want my partner to have original characters.

- No furries. Just… no. Had a bad experience with them and don’t like them in general. No offense to anyone. I will make some exceptions to certain things, like dragons that can have a human form, humans that can turn into werewolves involuntarily or voluntarily, etc etc. Basically no anthropomorphic animals.

- I only RP in these time period aesthetics: High and Late Middle Ages aesthetic, and Early to Late Renaissance-esque aesthetic. My characters tend to be in the Late Renaissance period aesthetic. Maybe I can stretch it to Early Colonial, but at that time, armor is already limited to only cuirasses and helmets, and a few weapons only being used at that time, such as mostly matchlock rifles, pikes, sabres, and maybe rapiers? Also, my characters are not meant to be used in historical settings in the real world. I just don't know the real world well enough to do an RP in the real world as I like some accuracy and logic in my RPs.

- Romance is not the main element. I like the Romance element, but it must be a secondary thing compared to the main plot. If you want lewd stuff, we must discuss it first. If we are going to do Romance, I prefer slow burn romances. That is, the characters taking the time to know each other, see if they have chemistry with each other. Being paired up just like that with no build up is just… empty and hollow.

- Hadrian is mostly straight, that is, MxF. I can do MxM, but there has to be some rules to it:

2 - Said partner has to be 'attractive' in a sense.

3 - Said partner would have to convince him to change his viewpoints on homosexuality because currently, the culture he grew up in is very intolerant of homosexuals.

- I record my RPs in Google Docs. If you wish, you can record the RPs for safekeeping too.

- If you have Discord, great. I have Discord too. If you want to keep in touch, my discord is this: Torag1000#8035. Or you can befriend me in RPRepository. I will do so in return too. Or if you have other sites we can be keep in touch with, I will try to register to said site, if you want me to.

I think that’s it for now with the rules and the like. I know it’s really long, but I really wanted to detail everything that I think I would like and enjoy from a person that is interested in my RP request. If you did read through all of this, I thank you for taking the time to do so. I hope it wasn’t too much. If you have any questions, ask me in the DMs please. I'll try to clarify things as best as I can. My world is still a WIP but I believe it's strong enough to be RPable in. You can message me in the DMs or post here if you are interested in the RP prompts. Thank you again!
Magic 60%
Magic may be accepted as truth but is not common. It might be harnessed only by specific beings. Lord of the Rings, Game of Thrones.
Technology 30%
Renaissance
Combat 60%
Combat is woven into the storyline and could come to the forefront if the characters seek it out.
Romance 40%
Romance is slightly desired, but the overall plot is more important.

You are on: Forums » Looking for RP » The Sheol (RP Request, 1on1, Renaissance) (closed)