dray
Updates
Hi all! Cindergrove has a new group that you can join here! It opens May 1st, and we'll be kicking off some initial quests, a monthly objective, and some meet & greet RP. If you have a fantasy-themed character who's looking for a home they can help build from the ground up, they are welcome to join us!

Welcome to the Cindergrove, the ruins of an ancient town that was once burned to the ground by a dragon. Though most of the rest of the town was wiped out, the Cindergrove Taphouse remains. Built on the crossroads of a trade route and a river, Cindergrove Taphouse is a two-story stone-and-wood affair with rooms for a few travelers, a small stables, and a few market-stalls in which merchants on their way to larger cities take pause and try to sell a few of their wares.

Steward Azerius is a Speckle Park Minotaur, keeper of the taphouse, and the would-be mayor of a town he wants to rebuild. Cindergrove was once a great town and a draw for magical and natural studies. To that end, he is looking for adventurers and those looking to trade their loot-plundering and danger-clearing skills in exchange for room, board, and help deciding how Cindergrove should grow.

((Cindergrove is a mixture of a D&D adventure and a town-builder, a little like Animal Crossing or Stardew Valley. You as adventurers may hang out in the taphouse and chat among one another, or accept a quest from Azerius' quest board. All quests have a 50% finder's fee (that is to say, Azerius wants to build koffers to help rebuild the town) and the rest are distributed to player characters or NPC's who joined the quest.))

How to play:
You do not have to have a D&D character sheet, just a fantasy-themed character. Some RP takes place in the taphouse, some will take place in simplified quests (eg: you can decide how your character overcomes a challenge, and whether you want character growth with failures or assisting others, and/or quest accomplishment with successes.)

Interested? Please feel free to chat below in the OOC tab or PM me.

Looking forward to rebuilding Cindergrove with you!

dray
Updates
20-04-23: I think we're ready to start testing the alpha version of this game! Please feel free to sign up; the game will officially open after Epic Week 2020 concludes!
Chugging along on notice boards and other graphics that will support game play.
20-04-19: We're still building, please check back soon!
Upcoming Events
20-??-??: Merchant changeover
20-??-??: Next activity sweep

The Quest Board
Quest Board Week 1
Name: Like, Share & Subscribe
Average Party Level: Any (social/diplomatic quest)
Number of Players Required to Start: 1 (quest is open to multiple players until completion of max # of workers is got. Multiple folks can work together, but you'll mostly be playing off of NPC's.)
Quest Description: See the minotaur Azerius inside the Cindergrove Taphouse for more details. Short version: he is looking for field hands to clear some of the overgrown fields near the taphouse and begin building farm houses for workers. He can host up to 5 unskilled workers (field clearers) and 2 skilled workers (masons and/or farmers preferred.) Can you find these NPC's and convince them to start a new life at Cindergrove?
Question Completion: Round up to 10 new workers to join Azerius in rebuilding Cindergrove's farms. (Minimum 1)
Quest Reward: 1sp per unskilled worker and 1gp per skilled worker, along with a bonus upon quest completion.

Name: R.O.U.S
Average Party Level: Level 1 bebes
Number of Players Required to Start: 2
Quest Description: See the minotaur Azerius inside the Cindergrove Taphouse for more details.
Short version: This is a classic RPG first quest. Meet another adventurer while slaying rats, work out a way to ensure that they can't get back into the larder.
Question Completion: Find and slay all the rats in the larder and figure out how they keep getting in.
Quest Reward: 10gp to be split among the party.

Name: Snicker Snacks
Average Party Level: Any
Number of Players Required to Start: 1
Quest Description: See a Kenku named Rat Trap in the merchant stalls for trade.
Short version: Rat Trap is looking for items and is willing to trade money or useful adventuring gear for them. Learn how to use the merchant stalls and offload any unwanted loot earned in the game. Meet an adorable birb man who loves garbage and garbage people.
Question Completion: When a trade is complete. (Lasts for 1 week before Rat Trap moves on.)
Quest Reward: None but what you can haggle.

Name: Merchant Accompaniment
Average Party Level: 1-4
Number of Players Required to Start: 4
Quest Description: See a Duergar named Thradal at the merchant stalls.
Short version: Thradal is stopping by some trade partners in the foothills 2 days journey from Cindergrove, but goblins block his route. Protect Cindergrove's wagon on the way to his trade partners and back again over the course of 5 days journey.
Question Completion: When party returns to Cindergrove with Thradal and his goods intact. (Or, possibly a less than ideal ending. The choice is up to you!)
Quest Reward: 20 gold to divvy among the party.

-A board image using a notice board creator.

Claiming a Quest
Post to the OOC side of the thread with your character's name and what quest you'd like to take. Once the required number of folks have added their name to the list, you're off! RP to find out how the quest resolves, and come back for rewards (or consequences, if things go terribly awry.)

Generally, the owner of the quest will offer a money, item, or service reward.

See more
Fill in the following form and PM Dray with the subject "Cindergrove Application: <Your character's name here>"

Application Intake
OPEN
(Character applications are open, however the actual game will open starting on May 1st!)
(There is a current character cap of 20, and the cap can be raised when the town has grown to accommodate visitors and new adventurers.)

See more
None yet. Will you be the first?

Cindergrove River
This wide river has a fording point very near to the taphouse. The ruins of old docks for water travel remain where they burned just below the current's surface.

Cindergrove Fields
The charred remains of the occasional farm house can still be found in this area west of the river and the taphouse, but most of the fields have been reclaimed by weeds and encroaching forest. Perhaps with some elbow grease and community spirit, Cindergrove could become self-sufficient?

Cindergrove Road
This dirt road trails off to the west to the forests and foothills far beyond Cindergrove. To the east, it can be forded at the Cindergrove River, and briefly passes through the ruins of the old town before returning to forest. Still, enough foot traffic is seen here that the road does not grow over. Maybe a toll would help generate some revenue? But watch out, too hefty a toll and fewer people will want to take this route...

Cindergrove Ruins
A cleared area east of the river is overgrown with moss, weeds and saplings. Still, with a lot of work and TLC, the solid cornerstones of the buildings here could be built upon again. It might be possible to revive Cindergrove, if everything Azureus says is true...


Merchant Stalls
Roll four times on the Merchants table in the Traders and Merchants section. These merchants are present at this location for 7 days, after which they depart and four new randomly-rolled merchants arrive, continuing this pattern every 7 days.
From X-Y Dates
Merchant: ???
(This is a male duergar wearing heavy robes; he can barely be seen but for the slits in his wooden mask and the heavily calloused dark hands that emerge from his layers of rough clothes.)
Wares: Mechanical Contraptions (Relatively poor quality)

Merchant: ???
(This appears to be an elf with dark skin, but a freckling of black scales mark his cheeks and ears, and you could swear you see nubs of horns poking from beyond his nearly matte black hair.)
Wares: Animals (Mounts and Pets) (Good quality) 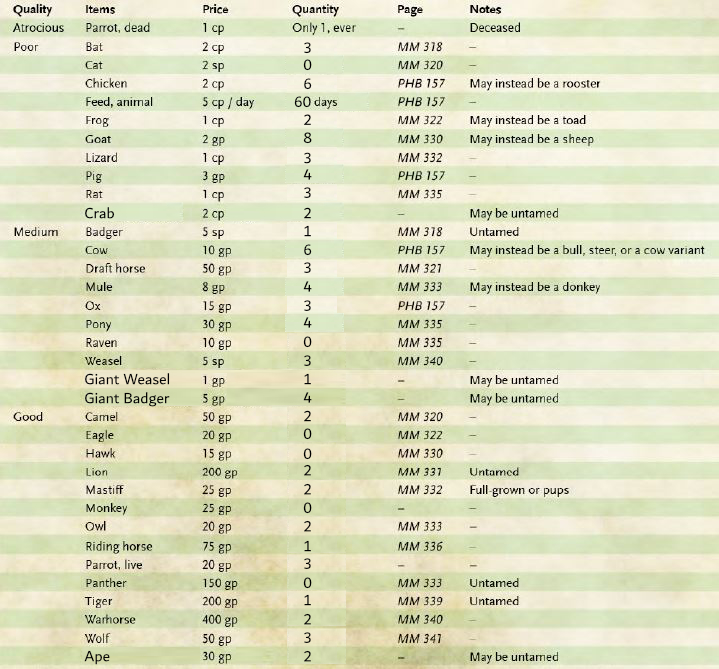 Merchant: ???
(This monstrously large goliath woman is dressed in full plate armour. She wears an intricately carved tusk like that from an elephant over her shoulder and across the opposite hip. She has an easy smile and laugh, but looks a little menacing even so.)
Wares: Religious Idols and Blessings (Excellent quality) 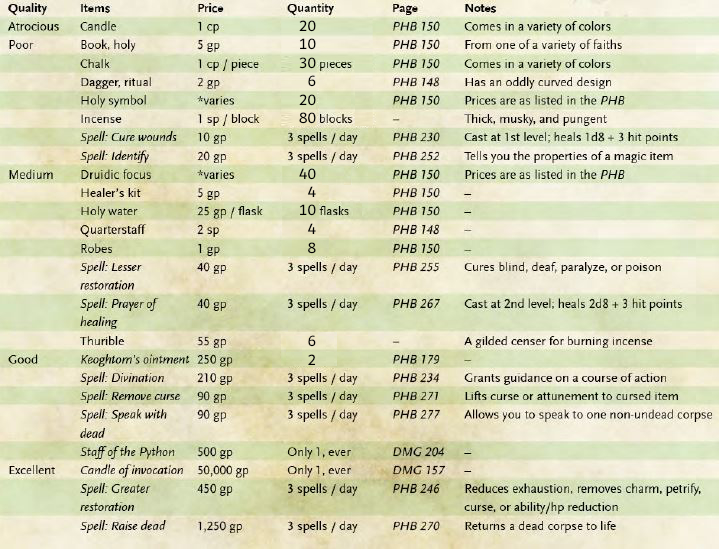 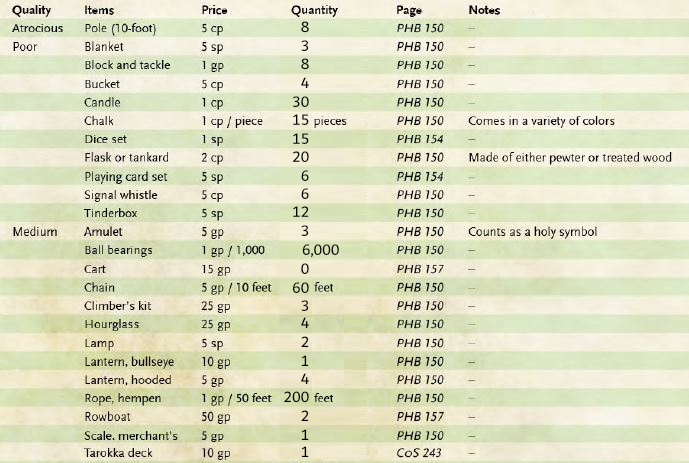 Merchant Information
Merchant Buy/Sell Form
(Post this in the OOC side of this thread, then update your character inventory as needed. If there is only 1 item left and 2 people attempt to make a purchase, the first person who posted gets first dibs.) 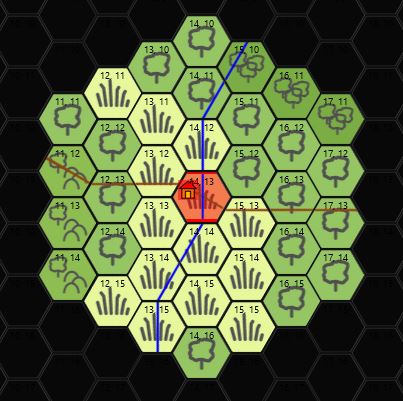 Credit to Hextml Free Hexmapper
1 hex = 5 miles
New hexes will be offered to explore as a reward for active participation, with introductory flavour text, the chance at finding gold, items, or earning XP, and discovering what sort of Quests can be had in the new area. (These will build on existing quests.)
April 18, 2020 12:46pm

Juls
((Do we need to know anything about Animal Crossing or Stardew Valley to participate, dray? I'm unfamiliar with both, but this sounds fun!))
April 21, 2020 8:16pm

dray
((absolutely not! It's more the idea of cultivating a community as a side benefit of cooperation and completing quests.

If anything I'm still figuring out the balance of how freeform to make this.

Basically, if you have a character who could fit into a fantasy setting who would be interested in helping the tavern owner, we'll try to make it work.))
April 22, 2020 10:56am

dray
Hi all, I've moved this thread over to a group called Cindergrove--it's a lot more organized for group play this way. Please take a look and join us. Fantasy themed characters looking to build a home for themselves are more than welcome.

You are on: Forums » Fantasy Roleplay » Cindergrove (New Group!)