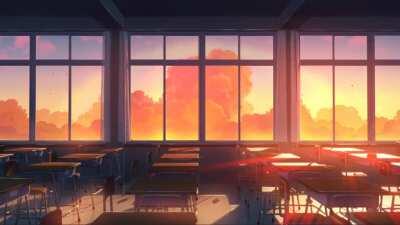 Today was supposed to be a day like no other. I had packed my bag with scrolls and poisons, and had gone on my way through Hell's Outback to go Demon School, where I'd ended up after killing my Clutch Patron. Here I was hoping to learn things other than fighting, so I could live on my own later.

However, once I walked inside the school building, I suddenly felt dizzy and had to close my eyes. When I open them again, I know something isn't right......

"What is this place?" I mumble.

I see it: there are people from all over the dimensions at this school! I see humans, aliens, talking animals and much more. It appears that something has caused the Worlds to mesh together; I am now stuck at a school with no exit, with hundreds of unknown creatures around me, who don't know what happened either.

I start to look around and strike up conversation with some of them, wondering what will happen next.
What will you do when your character do when they suddenly find themselves in a mysterious school with no exit? Here you can meet creatures, humans, aliens and animals from all over the universe and beyond, maybe finds friends or lovers, and together, unravel this strange mystery!

You can join this RP by just replying, there is no need to ask or anything, just jump on in. Only rules: no smut, no godmodding, and not only making it about you, think of others too.

Alpha Rex (played anonymously) Topic Starter
I see Princess Rosegem, and I snort. I don't like royalty, and not magical people either, because they thought of us Demons as monsters and that wasn't fair at all. I show my 3 rows of razor sharp teeth and growl. My eyes are glowing brightly.

Alpha Rex (played anonymously) Topic Starter
"Oh you think that is cool?!" I yell, my eyes still glowing and even brighter now. "You humans should've never gotten your filthy hands on magic!"

I hiss and blow a big green swirl of poison magic out of my mouth. It is really bright and really strong, like my hear and eyes, and some people that are walking around lost turn around to look at me. They seem really scared, but then a big white dragon walks up to us both.
February 15, 2021 5:39am

Alpha Rex (played anonymously) Topic Starter
"You made her cry," says the dragon, who is over 10 feet tall and has a lot of muscles and scars.

"So what?" I growl back at him, my eyes glowing, as I look up at him and grin with my sharp teeth. "She would kill us all if she could, but she is a coward and that's the only reason why none of us have to fight her."

The dragon gets very pissed off and jumps at me, but I jump out of the way and on his back, I grab him by the neck and bite. My teeth are very sharp and can bite through magma, so I bite down very hard and blood comes out. The dragon cries and falls to the floor.

"Sorry I made you cry," I say, looking at the dragon. "What are you doing here anyway? This was a Demon school, but suddenly there's weird people everywhere."
February 15, 2021 6:22am

Alpha Rex (played anonymously) Topic Starter
"Hey! He'll kill you, dragons and princesses don't go together!" I roar, eyes glowing so bright that the dragon doesn't get up anymore. Suddenly the dragon gets up and starts growling at you, I have to help but I don't because I'm angry with you.
February 16, 2021 6:22am

Alpha Rex (played anonymously) Topic Starter
The dragon starts to bite and chew on you, but I attack him again and rip his head off his body. He drops dead, and my eyes glow as I grin and show everyone who's looking at us, which is basically literally the whole school, my very sharp teeth. I wipe the blood off my face, but I like the taste.

"You can thank me later," I say to you, I give a wink. I look at the other people. "What are you looking at?"

When everyone wants to walk away, a very long and tall shadow creature walks up to us, she is a wearing a very nice purple bow tie. She looks at all the people and calls: "Hello class of the year x! Class is starting soon, will you follow me?" Everyone starts to follow her down the hall, very confused. I walk on the end of the group to make sure no one gets attacked again.
February 18, 2021 10:36am

Alpha Rex (played anonymously) Topic Starter
"You will be," I say to you, my eyes glowing mysteriously as I smirk and chuckle and run my claws through my cool, neon green hair.

Anyway, we then walk to a very big room somewhere in the middle of the school, I presume, which is shaped like a large circle with a smaller circle in the middle surrounding by circles of chairs for the students to sit on. I sit in the back, looking around with my glowing green eyes, sometimes I grin.

There appear more shadow people from around us, and they walk through the crowd and say who has to follow them.
February 18, 2021 1:35pm

Alpha Rex (played anonymously) Topic Starter
((Um your currently not writing as an oc just your player account but go ahead anyone can join without asking lol))
February 19, 2021 8:18am

Princess rosegem (played anonymously)
*looks irritated* "I won't go to any class, first off all I am a princess. And a princess has certainly more rights than having too follow teachers. I want to go to my own private school, with my own private teachers.' *Face turns rainbow*
February 20, 2021 7:03am

Alpha Rex (played anonymously) Topic Starter
"Geez lueeze, stop complaining," I laugh at you, grabbing your hand. "Come, it will be fun!"

One shadow person with a pink bow on her head comes up to us and motiones us to come with her. "Over here, you two! We are having a very fun class so it is your lucky day! We are doing Creature Magic, Im sure you will both love it a lot!" I grin, eyes glowing as it rub my hands. I really like monsters.
February 20, 2021 7:25am

Princess rosegem (played anonymously)
'I am not complaing I am saying my rights'*follows after shadow person thingys* 'Creature magic is easy, watch' * Eyes glow with glitter, hands glow* 'This stuff I learned in kindergarten' *boom a monster creature made of sugar is standing, growls at you and all the others. It starts biting people*

Alpha Rex (played anonymously) Topic Starter
"Why do I always have to do this," I sigh, my fangs glow and I jump up to kill the monster in one hit.

Sweets and sugar falls down everywhere, I pick up a diamond-like piece of sugar and start to chew on it. I laugh and give one to you too. "Maybe you need to train more, that they probably didn't teach you, but that was really funny." Not cool at all, though. I thought you were pretty nice now, even though you were a royal.

"Very sad that the monster is gone," says the shadow person. "But it's alright, we will have plenty of other cool monsters later. We're at the class, pick a seat, children."
February 20, 2021 8:10am

Princess rosegem (played anonymously)
'Such a shame it was so pretty' *Chews on sugar* 'we should burry the sugar and sweets, and make a grave for the monster' *cries a little* 'Yes I will make much more sugar monsters, I could make gingerbread men' *takes seat next to you*

You are on: Forums » General Roleplay » Fantastic People's School Between Worlds (open)