Kim Site Admin
Official topic for discussing how to most effectively play the Epic Farming game.

I'm going to repurpose this post in the thread as something of a guide as I figure out the essentials of the new game we have this year, so it will be a work in progress for some time to come.

Getting Started
So, you've launched the game and find yourself next to a couple of NPC's and a campfire, and you find yourself wondering just what it is that you're supposed to do next, have you?

Early on, those two NPCs will have no use to you in any form, as they are used for purchasing items that so far, just starting off, you cannot currently acquire the money for them. But keep them tucked away for later on in your progression.

From there, you have a crafting bench, which offers a wide number of various recipes for tools and similar objects to craft to contribute to the cause, as well as a chest beside it, which is private storage so you can store things there for later use without worrying about completely filling your inventory.

How do you make things, you ask? The same way that any good farming game begins, wandering out into the wilderness and punching some trees until they crumble beneath your mighty fists! From there, you can return to the crafting bench(Pressing F5 to refresh can be faster, as it respawns you at the beginning) and make your first tools. Namely, a wooden pickaxe, and a wooden hoe.

The pickaxe allows you to harvest many of the stone and metal nodes that are located to the west of the starting area. A higher level pickaxe is required to harvest gold nodes

The axe is straight forward as well once you've collected enough stone to craft it, allowing you to harvest trees not only faster, but for more resources than punching them would accomplish. 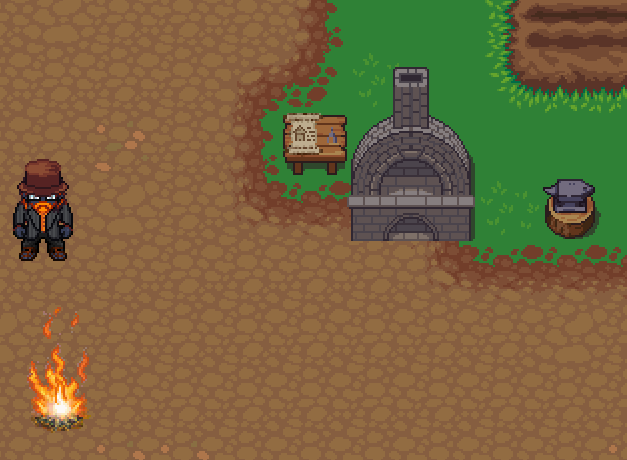 To the east of the crafting bench and chest, are the forge as well as the anvil, which help you with crafting more advanced items at this point.

But, before you start smelting down all of your ore, take a look at what you can craft with the basic iron, as those tools only have more durability than their wood/stone counterparts, but still cannot harvest gold.

To be able to harvest gold yourself, you'll need to smelt steel.

Below, are the required recipes for crafting either standard iron(required for many structures), as well as steel(for tools) 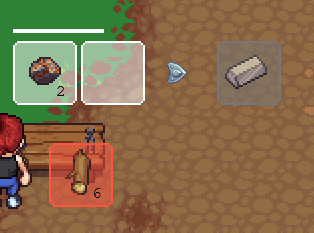 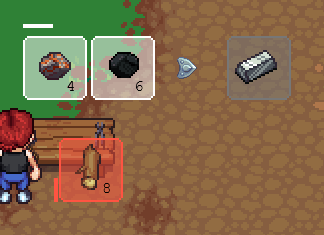 I highly reccommend only using coal in the recipe of making steel, as it is difficult to come by, and wood is just as viable of a fuel source on account of how plentiful it is.

Farming & You: How to Grow Some Plants
So, you've done the rest of the stuff, and you find yourself asking 'how do I feed these poor unfortunate refugees, surely there must be something I can do?' Well, I have the answer for you!

While roaming the map, you have the chance to find a pile of random seeds, which, unsurprisingly, when planted, will generate a random crop.

Your other option for getting specific seeds, is to purchase them from the Minotaur NPC, for the cost of 1 gold per seed.

Once you have your seeds, you've got to find yourself a hoe, so that you can... work the land. Where did you think I was going with that? You should also have at least one bucket with you, because watering a large number of crops is no small undertaking and the walking back and forth from a well will take significantly longer if you're doing a large farming project.

Once the farming soil has been prepared with the hoe, you are free to plant those seeds. Once planted, it's time to water them with your trusty bucket(s)!
Watered crops will have a dark patch of damp soil beneath them, for ease of telling if your crops are, or are not watered.

From there, it's a bit of a waiting game. Most crops seem to take 2-3 water cycles to fully mature so that you can harvest them.
The yield from each seed tends to vary, with most of them averaging around 2-4 per seed, with corn and wheat being the exception as they are somewhere between 5-6 per seed.

But Mags, I don't have endless gold to keep buying more seeds, and finding random seeds is not a fast endeavor... Is there anything I can do?

Why yes, beautiful human, there is! Allow me to introduce you to the seed extractor!

There is one located to the west of spawn, and one right below the main crop fields to the east, and they function exactly how one might imagine. By putting in your grown crops, and wood to fuel it, you can turn each crop item into a single seed. It may be a slow process to build up seeds, but in no time at all, one seed becomes three. Three seeds become nine, and before long, you have a field so large that you wonder what life decisions brought you to this point. 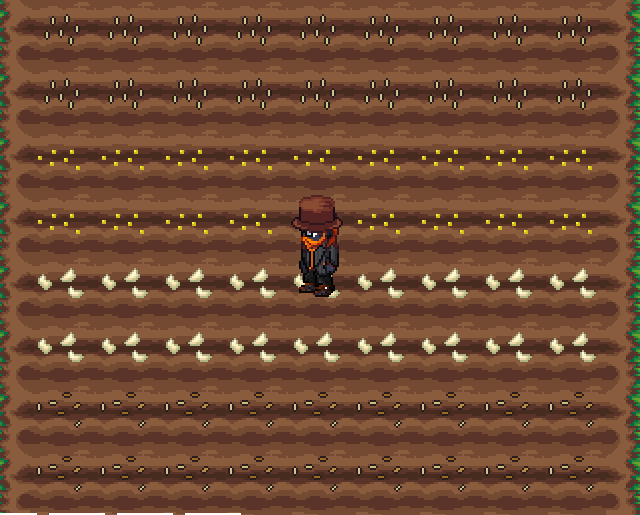 So, happy farming, friends! Lets get out there and crush this event. You can take your well-earned crops and use a campfire to turn them into more filling foods, but most take a number of different crops to craft.

The next update will bring more details on [img]food crafting[/img] and which recipe provides the most food value to the refugees.
April 24, 2021 9:27am

Kim Topic Starter Site Admin
You CAN punch down trees without tools, it just takes awhile

Magnakor
Unsure what just happened, but i seem to have lost connection and all my inventory when changing map screens.
Refreshing hasn't brought it back, as well.

Cass Moderator
Is there a way I can give people items?

Magnakor
and right back to 'map data loading...' again after I accidentally dropped a tool when trying to minimize the inventory window and changing screens.
April 24, 2021 10:07am

whispers
Hi there! I was just playing a few minutes ago, but I changed areas, and now it says "loading map data." I've tried reloading the game multiple times, but there's been no change. I can see other avatars moving and I can move around; it's just that otherwise, the world is not loading. Gonna try to restart my computer, see if that works, but just in case other people have the same issue, i'm popping this worry here. Sorry for bugging you!

Kim Topic Starter Site Admin
You are not bugging me! I'll work on that. Restarting your computer won't help though
April 24, 2021 10:23am

Kim Topic Starter Site Admin
With the speed we're working the map, I can see I'll need to turn up rock spawning

Auberon Moderator
Hey dudes, we already have two smelters in progress, so hold off on adding any more just yet.