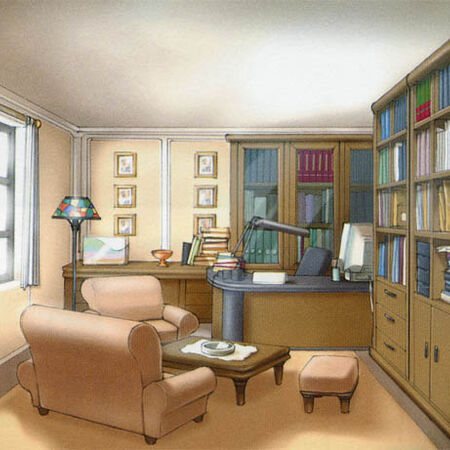 Phoenix yawned as he walked into his office. "Man. What a night I had." He said as he got another defendant innocent. Phoenix walked into his office to get ready to take on a new case. As soon as he sat in his chair, the phone started to ring as he answered. "This is Wright Law Agency. Phoenix Wright speaking."

Lucia (played by AshleighKate)
"Hello Phoenix," Lucia said on the other line, "I heard you were the best. I need your help"

Lucia knew that her feminine voice had been tainted with a dark aura. Her best friend Niko Walters had just been killed. And some jerk had framed her for it. Apparently the police had an anonymous "lead" that it was her and that the lead had seen her do it which was, excuse her language, a bunch of utter bull. So here she was: police officers waiting outside as she sat in a seat in a locked room at the police station after having been questioned for the last hour and half. And it was god damn FREEZING in here.

Or maybe that was just her thirst to find out who the heck framed her and wring their neck. At least if she was locked up for that, it would be because she actually DID kill someone.

Apparently she was going on trial though they couldn't confirm what date yet. Until then, she was being held in a "guest room" at the police station- a nice way of saying she was in prison.

Phoenix Wright (played by TheWrightWay) Topic Starter
Phoenix nodded. "OK, Lucia. Can you tell me exactly what happened?" He asked.
May 5, 2021 3:29am

Lucia (played by AshleighKate)
Lucia twirled the phone chord around her finger, "this Saturday just gone, I was on my way back from dinner with some friends. It was around 11pm as we had decided to stay at the Red Elephant Bar on Stewart Street to play some pool. I was walking down the alley next to the bar that lead to my car when I saw my best friend by one of the dumpsters. He was gasping and blood was spilling from his mouth with several stab wounds on his throat. I called an ambulance and tried to stop the bleeding with my jacket but I was too late. By the time the ambulance and police officers arrived, he was dead. I always carry a switch knife around for protection in my jacket pocket and because my jacket was used to plug the wound, it was found covered in blood..."
May 5, 2021 4:16am

Phoenix Wright (played by TheWrightWay) Topic Starter
"Is that why the police believed that you killed your friend? Is there anyone who would want to kill him?" Phoenix asked.
May 5, 2021 7:39am

Lucia (played by AshleighKate)
"Apparently, someone told the police that they saw me do it even though there was no one else in that alley. He has a few people that don't like him, for sure but no one who I know of that should hate him enough to kill him?"
May 5, 2021 7:44am

Phoenix Wright (played by TheWrightWay) Topic Starter
Phoenix nodded. "OK. I'm gonna head down to the crime scene to find some evidence to prove your innocence." He said.
May 5, 2021 12:21pm

Lucia (played by AshleighKate)
"Thank you." Said Lucia, "please keep me updated. I can give you some names of people that don't like him, too if that helps. His neighbor was always angry that he was too noisy. His name is Thomas Smith. Also, he did not get along with his daughter. She never forgave him after him and his mother split up, even less so when she found out he would be getting remarried. Good luck." She hung up.
May 6, 2021 2:39am

Phoenix Wright (played by TheWrightWay) Topic Starter
Phoenix hung up and grabbed his coat as he headed off to the crime scene.

Phoenix has drove to the crime scene in his blue car and could see the police at work. He hoped that the detective is a nice guy like another detective he knows.
May 6, 2021 2:53am

Lucia receives a phone call from her best friend's fiancé.

"Hi, Lucia, it's Amy." she sounded like she had been crying, her voice hoarse "I heard you were at Meritime Police Station. Have you found yourself a lawyer? I have a friend who would like to look into the case and assist the investigators if that is alright with you."

Lucia thought about this for a second. She wasn't particularly close with Niko's fiance but she couldn't blame the girl for wanting to send someone she trusted to take a look. Perhaps he would be able to help plead her case, too.

"...sure." she said after a moment's hesitation.

"Thanks for being so understanding." Amy said, "I will send him to the Red Elephant to do his own investigations"
May 6, 2021 5:46am

Phoenix Wright (played by TheWrightWay) Topic Starter
Detective Luke Goldman was the lead detective on the case and allowed Phoenix to do is own investigation. He saw the bartender. "Excuse me? Were you working here last night? He asked.
May 6, 2021 10:38pm

Lucia (played by AshleighKate)
The bartender saw the stern looking man and pursed his lips together. The detectives, for the most part, had been and gone already and he didn't look like a reporter with the lack of equipment he was carrying... He paused, putting down the beer glass her was drying.

Phoenix Wright (played by TheWrightWay) Topic Starter
"My name is Phoenix Wright. I'm a defense attorney to defend my client to prove her innocence." Phoenix replied as he tried to get some information from the bartender.
May 7, 2021 4:41am

Lucia (played by AshleighKate)
"I see..." the man answered slowly, "If it's the case that happened down the road from here, I don't believe she's innocent. She was the only one found near a dead man. She was carrying knife. Awfully suspicious, don't you think? But I suppose if you can supply ID and your buy both yourself AND me a beer, I can spare a moment to answer some questions."
May 7, 2021 1:44pm

Phoenix Wright (played by TheWrightWay) Topic Starter
Phoenix Wright showed the bartender his ID and bought them drinks. "So, what can you recall about last night?" He asked.
May 8, 2021 1:43am

Lucia (played by AshleighKate)
The bartender poured them both a drink, taking a swig of his own.

"Around 8pm a small group of friends including that dark haired girl... Lucian was it? Lucy? Lucerell? arrived with a group of her friends. They were sitting over there" he signaled to a back table, "playing pool. The guy who was murdered was in the group, too. Sometime during the night, I suspect the guy left because I don't remember seeing him with the rest of the group from about 9.30. I do remember one of the bouncers having to ask him to go outside once though... he seemed to be having a really heated argument with somebody over the phone in the middle of the bar..."
May 8, 2021 2:07am

Phoenix Wright (played by TheWrightWay) Topic Starter
"Do you know what the argument was about?" Phoenix asked as he took a sip of his beer.
May 8, 2021 2:29am

Lucia (played by AshleighKate)
The bartender shrugged. "From what I could catch, someone was having a go at him for being at the bar he was at... though if you ask me who, I have no idea. I remember seeing him on the phone several times that night and I'm not even sure if it was to the same person."
May 8, 2021 3:17am

Phoenix Wright (played by TheWrightWay) Topic Starter
"I see. Well, besides you, did anyone else see the defendant who thinks they saw her killer the victim?" Phoenix asked.
May 9, 2021 3:49am

AshleighKate
Phoenix Wright wrote:
"I see. Well, besides you, did anyone else see the defendant who thinks they saw her killer the victim?" Phoenix asked.

Sorry, I'm not sure what he's asking?

You are on: Forums » General Roleplay » Turnabout for a Wedding [Open]