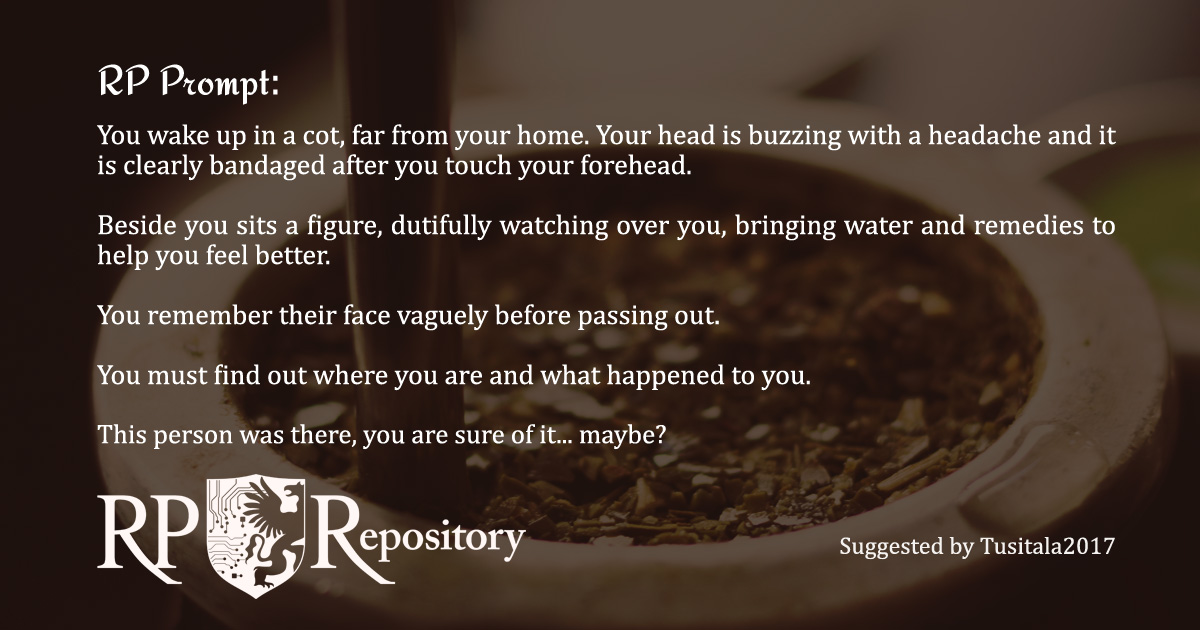 Shadowy images danced in her vision, muffled voices ringing in her ears. She couldn't make sense of anything going on...it was all a blur. A dream she couldn't seem to wake up from. The muffled sounds grew louder. Angrier. The shadows became more menacing, growing in size as they approached her. One appeared as if to grab her, a long arm aiming for her throat. She wanted to scream, but no sound came. Then, searing pain and a flash of white light forced all the shadows to disappear, and she found herself back in the conscious world.

Elicia Hughes groaned from her position on a rough cot. Her small frame was covered in a thin blanket so that only her bare shoulders and head were revealed. Reaching up with a hand, she felt at her forehead from where the searing pain was emanating. Her delicate fingertips could make out the texture of a fabric bandage wrapped around her head. Long blonde hair played out behind her head and over her bandaged forehead in a tangled mess. What? What happened? When she tried to move, her body protested, every muscle screaming at her to lie still. She was in no position to argue just yet, so instead focused on trying to turn her head.

Her vision was blurred, but was slowly coming into focus. There, sitting beside her, was...someone. Elicia's brow furrowed with frustration and pain as she tried to force her azure eyes to focus on the person. "Where...am I?" she groaned, her voice raspy as if she hadn't spoken in days. The sound of her voice surprised her, as did the faint ringing in her ears that followed. "Where am I?" she repeated, clearing her throat to make her words a bit more clear.

"The hell happened...?" Mocha slowly opens her eyes and looks around. The world spun around her. Barely anything appeared as a straight line to her, and those that did were extremely blurry. She sat up and looked down at her body, inspecting herself for other possible injuries. Wearing just a bra for a top, it had small blood spots, which concerned her even more. Whatever happened to her must have been bad, but clearly not bad enough to at least attempt to kill her.

Looking around the room, her eyes finally adjusting to her surroundings, Mocha sees Elicia in another cot and wonders what she had to do with whatever happened. "I-" she started, interrupted by a coughing fit. "I don't have a clue..."
April 22, 2022 10:03pm

Kalisto (played by Kaltech)
Kalisto floated in the dark underbelly of her conscience, a dullness emanating through her body. Dull thumping noises reached her ears, followed by muffled chatter and the occasional bark of an order. She roiled about the empty domain, grasping for a sliver of something to pull her out of whatever funk she was stuck in. A hollowness had taken root in her, branching over her limbs and leaving her numb. Another thump. A yell, this time farther away. Retreating footsteps. Then, silence. Kalisto, in what was possibly the single hardest action she'd taken that day- was it day? night? she couldn't tell- forced her eyes open, to take in the cots lined up neatly next to her, as well as the figures stuffed inside them. Almost like straight suit jackets, she thought bizarrely, head thumping. Designed to keep them cocooned, trapped. Kalisto tried to lift her head up and survey the room, but alas, it was not to be, for her eyes burned with the strain and her sudden burst of energy left. Kalisto's head fell back to the cot with an audible thump and all was dark.

A while later, Kalisto woke up. Her mouth felt dessert dry and rotten, saliva sticking to her gums in a desperate bid of moisturization. Drowsiness plagued her being, the cot a sirens call of sleep. Her limbs moved slowly, unsteadily, as she pressed her fingers to the gulp of her throat and rubbed, attempting to repel the just awoken dryness of it. Crust stuck to her eyes. Kalisto rubbed at her left eye with her finger and looked at the yellow crust before flicking it away. She looked like a veritable sleeping beauty, if sleeping beauty had been dragged through the dessert whilst tied to the back of a speeding dune buggy. Squinting, Kalisto slowly turned her head around and met the eyes of a blond girl, a fabric bandage wrapped around her head. On the next cot over sat another girl, clad only in a bloodied bra. Kalisto frowned and looked down. Her own clothes seemed to be in a relatively decent condition, with only a few rips and a strange white substance clinging to her pants.

"Who-", Kalisto started, before clearing her throat. God, she would kill for some water right about now. "Who are you people?" She asked the two, eyes narrowed. She clutched the pillow underneath her protectively. Not much could be done with a pillow, but at the very least she could use it as a distraction while she attempted to force her legs to work so she could book it out of there if things went awry.
April 24, 2022 10:11am

Michaella Kassandra (played by KatieKat96)
Mocha turned to Kalisto. She spoke quietly, for fear of anything - rather, anyone - harmful hearing if she spoke too loud. "Shh!! Calm down! I'm not going to hurt you."

She pulled off the blanket atop the lower half of her body, revealing her black pants, covered in rips and tears from front to back. She repositioned herself to be sitting on the edge of the cot. Light pink socks covered her feet as she touched the floor looking for her boots. She looked back up at Kalisto.

Blizzardtheicewing
A dragon suddenly crashes in to a tree nearby
May 2, 2022 6:21pm

Hindbromloost (played by Blizzardtheicewing)
Ok don't fly in to a tree next time good
May 2, 2022 6:22pm

Blizzardtheicewing
The dragon seems to be taking notes mentality