Map & Avatar Musings: What Should Our Avatars Be Able to Do?

Okay, so if we're going to start with Liberated Pixel Cup assets, we're still left with a ton of questions and decisions. One of the first big ones is: what should our avatars be able to do?

The Liberated Pixel Cup set out to make assets that could be used for as many different kinds of games and purposes as possible, and as such, their base avatar sheet ended up looking something like this: 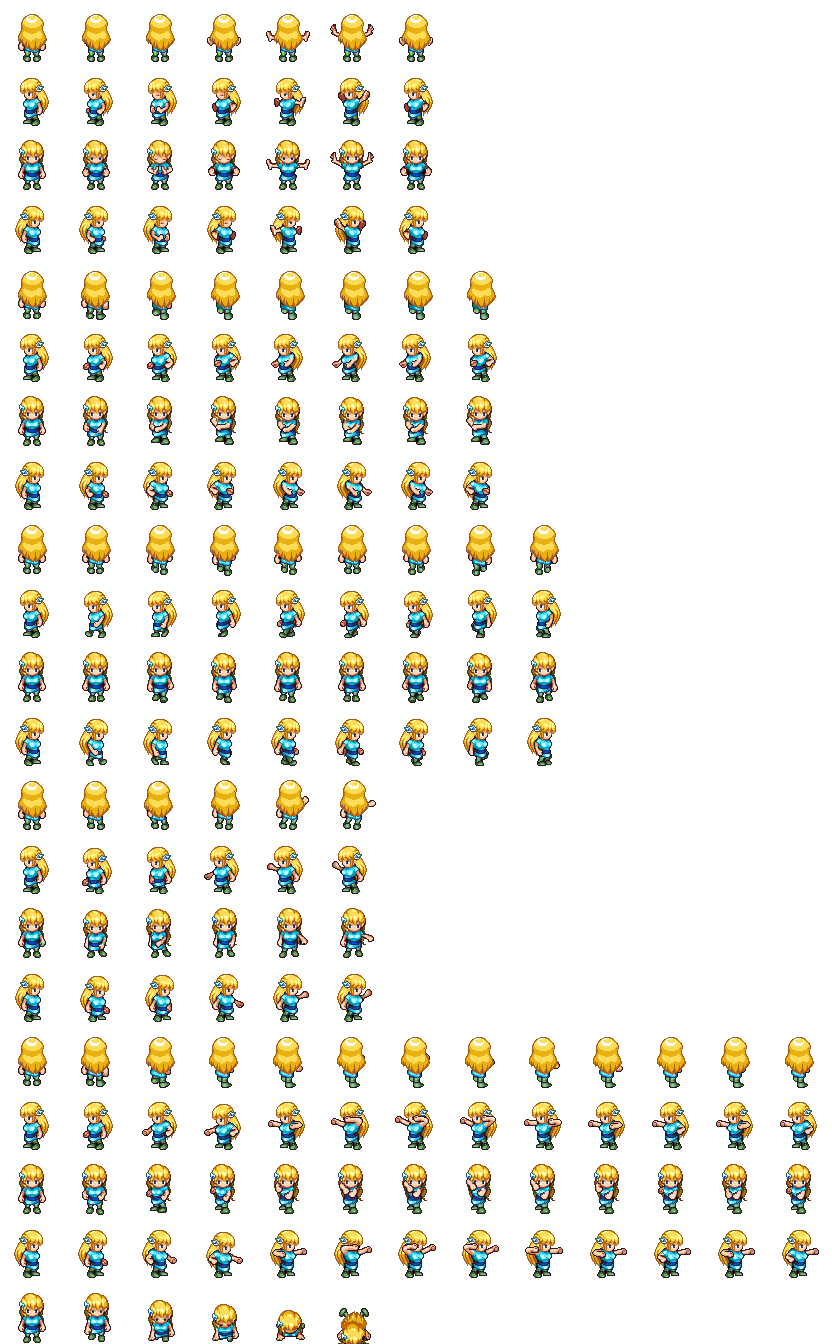 (click here to see the source of this sheet)

From top to bottom, this includes the following animations: spell casting, thrusting (as in a spear), walking, slashing, drawing a bow, and collapsing.

Many LPC sprite bases take this even further, and add on additional animations for picking things up, jumping, blocking, etc.

We'd have to decide, what would OUR avatars actually need to do? What might we want them to do? What's the best balance between not overwhelming aspiring asset artists, and allowing our very own mini-games and creative maps to flourish in ways we didn't expect?

Clearly, the base minimum that we'd need to get by is standing and walking. Would we also want to add sitting poses? Should the avatar sit with the legs folded under itself, or cross legged, so it could sit on the ground? Should it be drawn with the legs dangling down as is better visually for sitting on furniture or piloting a starship? Should we include both types of sitting? What about lying down?

Should we include the basic "slash" animation to signify general action, as we did for the farming game? Or should we retain only the walking animation, but include a series of one-frame poses for giving reactions or striking attitudes?

The balance I tried for the farming game itself was utilizing only the walking and slashing animations, which caused our sprite sheets for that purpose to look like this: 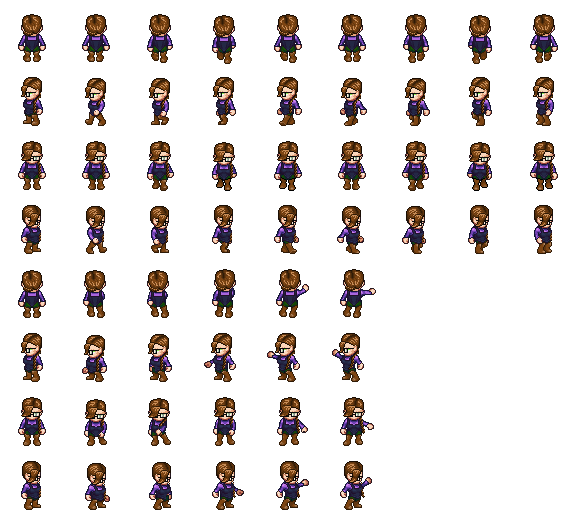 Not quite as wild as the above example, but still quite a lot of poses that new clothing or other accessories would need to be drawn for!

Once we had launched avatars and maps, it would be extremely difficult to add or remove support for a type of avatar action, not least because if we ever added a new action, every bit of hair/clothing/accessory art that had been created would have to be revisited and expanded by their artists. Whatever balance we struck between ease of creating new assets and greater capability would likely be the balance we had to stick with until the bitter end.

This is a set of questions I'm still very actively wrestling with. Feedback and ideas are very welcome!

Yeah! I've been thinking a lot about it, and a speech bubble, or sweat drops, or hearts, or snoring Zzzzs, all would be very easy to place just above a sprite's head, and could give us a huuuge range of additional reactions without having to draw new stuff for the base sprite and reduce the need for too much of a range of poses or attitudes that could be struck.

I think maybe instead of animating different facial expressions (especially since the faces are so small), maybe having speech bubbles with a reaction that pops up might be easier to handle?

I do like the idea of different poses though! The slash animation does work with pretty much most actions (especially if there’s a relevant sound effect, like with the bucket), but it might be handy to have something we can use as an AFK pose!

That's definitely one of the things I'm trying to find out with posts like this! It's yielded a lot of good feedback so far

"thrusting (as in a spear)"

I don't think we're going to artificially cap the number of customizations that artists can contribute as they like -- obviously there's only so many I can commission or draw myself "officially," but I already have artists clamoring in my DMs to start creating various kinds of avatar assets, and a stack of requests from players about the types of assets their particular characters would need. I'd really like to find a balance that supports all that creativity

Oh, yes. For that part of the issue, I just have to think to limit those options, specifically so you aren't asking artists to give themselves aneurysms.

Maybe something like a poll for the most popular "styles", choose the top one or two, and there you go.

I get what you're saying, and I'm less worried about the internal variants of colors and whatnot. They would all still look like different "prints" of the same long-sleeve shirt -- what if I want a shirt with cap sleeves? A scoop neck? a boat neck? A crop top? Those are the variants that would still unavoidably need drawing.

We can start with a handful of tops and bottoms, but the intense thirst for customizations shouldn't be underestimated.

Well, yes, but what I'm saying is only have one or two tops and one or two bottoms; have the customization be just an overlay that doesn't require any additional sprites but the "blank". So you could have forty-seven different-looking shirts, but only one shirt "blank".

I think that makes sense.

Ah, yeah, I see what you're saying -- the color swapping isn't so much the hard part as the creation of all those "default" pieces. Your default shirt still has to be drawn for every pose, and, if going to be used for each type of avatar, drawn for every pose across every default avatar base (currently we have 3, but I suspect we'll end up with even more than that.) Which is why I am hesitant to add any extra poses to our default avatar; each additional one has to go through a cost/benefit analysis, basically.

Makes perfect sense. I think I wasn't being clear enough. I meant something like have one "blank" item--say a shirt--that itself is created to fit every pose. On that "blank" the graphic is overlaid, so you can have a pink shirt, a blue shirt, a purple-and-green polka-dotted shirt--whatever. The "look" of the shirt varies, but the shirt "item" doesn't.

I think I made even less sense than before, but here we are.

So for example, the above avatar was made out of the following assets: 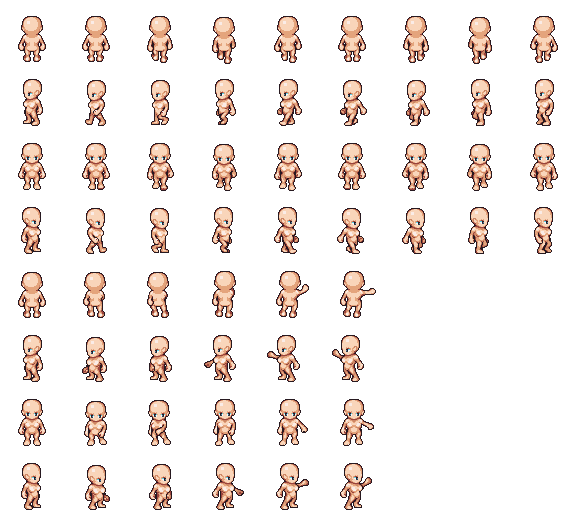 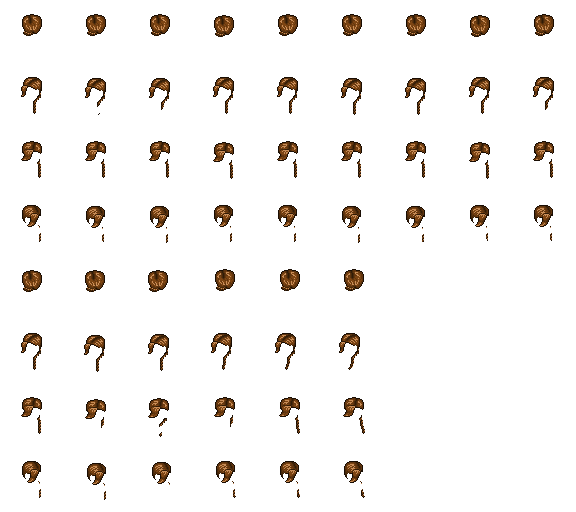 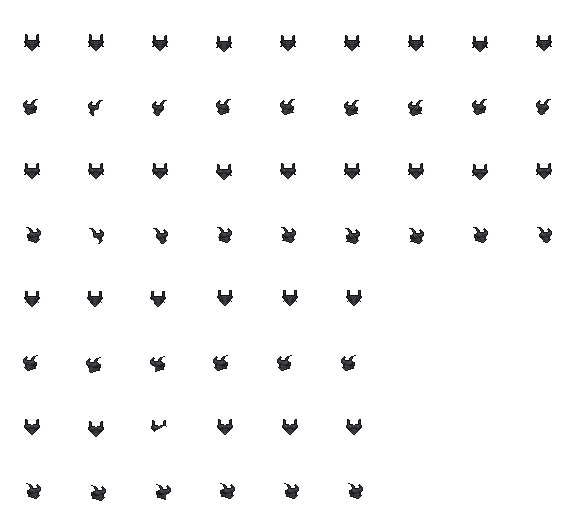 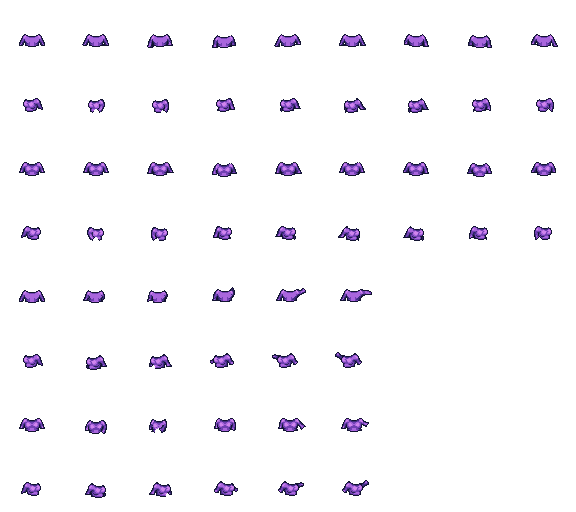 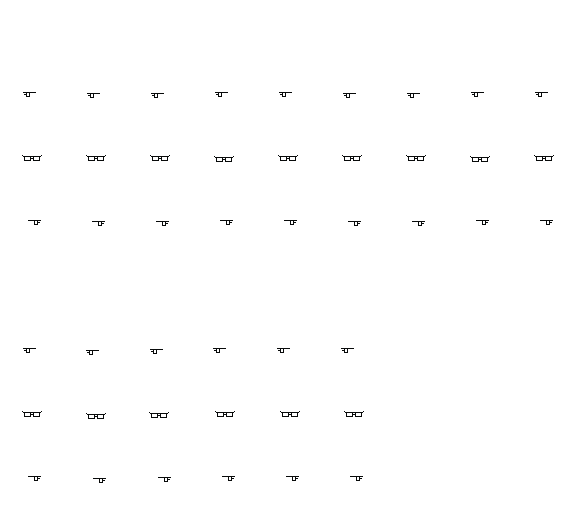 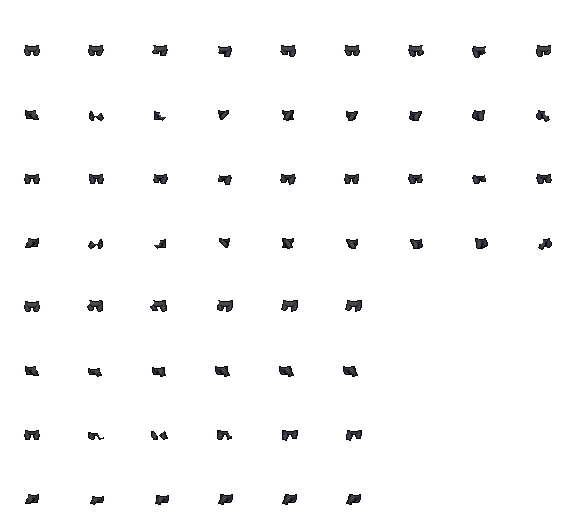 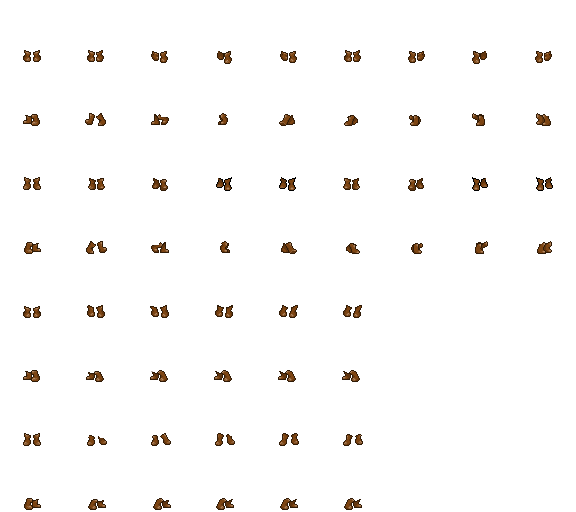 @Thylonicus - That's essentially how we handle avatar generation! The clothing, hair, eye colors, etc, are all on their own separate sheets. Then, when a person has finished picking which options they want, we take all the different layers they chose and flatten them down into an avatar for that person's use.

So, if you want a blue t-shirt with red hair, you don't have to draw an avatar that has both those things. You just have to pick a blue t-shirt and pick some red hair, each of which was drawn separately. However, each of them had to be drawn for every pose the avatar can take, otherwise you'd just have a picture of a t-shirt pasted on top of a person but clearly not being worn by that person. Does that make sense at all?

I don't know anything about pixel art other than it's really nifty but also really hard, and similarly I know nothing about coding and programming other than it seems like magic to me, so I am fully prepared to be told my thoughts are nice but unworkable.

That said--would it be possible to have clothing be handled differently, such as a separate layer overlaid onto the base sprite? If they all move similarly with the primary differences being cosmetic, that seems like it would open up the customization options while not burdening artists with needing to do a skidillion avatars just for varying T-shirts, blouses, trousers, trunks, or whatever else.

I'm led to that thought by "doll-makers" on sites such as Doll Divine; I realize that Flash/HTML5 programming isn't the same as this, but I wonder if the underlying theory of how they "work" might not be usable. Hero Machine was like a doll-maker cranked up to eleven, designed so one could export bits and use them in Flash animation, and it operated very similarly vis-a-vis clothing and layers. Again, I know that kind of programming isn't analogous to this, but I wonder if the theory might be applicable.

I like Heimdall's idea of equipping items, though as an asset maker, I feel like being able to choose the hand that's equipping something would cause unnecessary workload bloat for very little tangible returns.

I love the idea of single-frame action stances, as well as some kind of spell effect layer. This would be especially helpful for people using maps for tabletop games.

For sitting, I think taking a page out of other MMO's books and doing something with criss-cross or otherwise folded legs is probably the most versatile option. It might not be as immersive if someone's sitting that way on a bar stool, but it's adorable pixels, so does it really have to be?

I think a lying down pose is definitely a necessity! Lots of reasons for someone to be prone, so I can see it getting a lot of use.

I HAVE SO MANY THOUGHTS.

I think that the "press button to start an animation" type action that we had in the farm game will be less useful for RP, where there will be delays while people type their responses. I would primarily utilize the maps and avatars like a roll20 style tool, to visualize positioning and providing atmosphere to surroundings. Therefore, I think the focus should be in slight favor of asynchronous action--which does mean less animation.

Beyond this, having a series of single-frame stances would be awesome to create variety among avatars in a single scene, and to better evoke emotions in a written scene. Each of these would need to be drawn for each of the four directions (barring the left/right flip). Some random ideas:
Carrying items?
I figure this is probably already on the docket! This isn't a question of an avatar pose so much as the ability to layer a handheld item on top of the above poses. Unfortunately for asset creators, I think being able to pick the hand its equipped in is important too, and being able to equip an item in each hand, allowing for a sword/shield combo, two drumsticks, etc.

Spell effects?
Being able to layer on spell effects (or things like thought bubbles, startled action lines, STINK LINES, etc.) would be relatively easy, asset-wise, since they're less dependent on direction, and would add a lot of emotiveness and utility!

Facial expressions?
In the grand scheme of things, the faces don't change much when animated. You'll basically have one face for each direction, more or less. So the inclusion of minor facial expressions might be feasible. Closed eyes, angry eyes, sad eyes?

Having different walks (such as regular walk, sassy walk, shambling walk, etc.) would explode the number of poses that artists would have to draw every single new piece of clothing/hair/other accessory for, which would depress the number of outfits and looks you could design for an avatar, so I hesitate to do something like that. It would be fun though!

Maybe you can make animations like you can choose the way they walk and stuff like that.
But they are already really good.

I honestly thought the blonde character was dabbing on the 16th row.