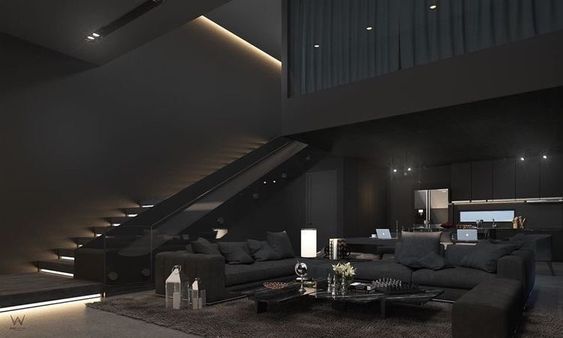 A small building just on the edge of the town, whose name no one can quite remember; or find on any map for that matter. High walls, tastefully decorated with paintings and older movie posters, or the painfully cleaned flooring that one can seemingly stare right through: it definitely leaves an impression.

Inside, it's said to be inhabited by a strange woman. She seems quite normal, but perhaps it's her profession that scares others away. Are you brave enough to trek within these four walls, maybe meet Miss Fortune for yourself?
[ This is for anyone to join! Really just made this to make some character connections with my character Maeve! ]
December 4, 2022 10:48am

Ahlam Valaide (played by CallMeCrazy)
The door to the basement is flung open. The harsh banging of metal on metal followed by the soft whimper of its hinges. A hand slaps the cool metal halting it's slow creep backwards. The tall devilishly handsome creature steps thorough his body looking like it was sculpted from marble. His warm tanned skin frozen in perfection as water drips from its hair. A long black towel wrapped around it's waits while its other hand clutched the soft material. His eyes darting around the seemingly empty room. Ragged rage laced breaths escaping its mouth.

"Where in the unholy **** is my peppermint conditioner?! That's my good shit and you had better not used it Maeve!" Shouting through the building as he grumbled and stomped back down the steps into the basement. Not even a minute later he was back at the door bracing himself in the door frame. Barefooted but wearing a pair of slim deep navy-blue jeans, and a shirt that he only wore to show off his physique. "I'm going to search up the most random shit on her YouTube account and **** her algorithm up so damn bad!"
December 4, 2022 11:36am

Miss Fortune (played by -Rosebud-) Topic Starter
The redhead was flipping through different files, each kept neatly in manila folders with her handwriting scrawled across the front. Business had been painfully slow, and with the undead pain in her ass racking up all her bills, it didn't help. Her tongue clicked against the roof of her mouth, Maeve almost flying out of her chair at the sounds of shouting coming from the lower-level floors of her home. A breath of relief escaped her lips when she realized exactly what it was, though relief was the farthest thing she felt.

"Damned vampire." She muttered, raking her hand through her hair before pushing herself out of her chair. It was a miracle she didn't off him yet, but he always knew where to find things that were nearly impossible for her to get her hands on. Heeled boots clicked against the tiled floor as she made her way down the stairs, smoothing out the front of the charcoal gray blazer she wore. She wore matching slacks with it, her mother's necklace glimmering just beneath the white button up shirt the clung to her upper half.

"Must you yell? I don't touch your damned hair products, don't get your fangs in a twist." She retorted, her patience wearing a bit thin.
December 4, 2022 2:35pm

Ayla and Meng (played by PinkBrat)
No matter who you were, there were always going to be rumors circling about you. Whoever owned the building, Ayla stood before, was no exception.

Though the rumors she heard were more along the lines of some creepy old woman with a haunted home. Kids, most likely, started it. But here she was, curious as a kitten. Which always tended to land her in trouble in some shape or form, but that never changed her. Ayla was not one to know fear, even if death was staring her in the face. Which it had before.

She didn't enter the building or even knock. She trampled around the property as if she would find something of more interest. She did pause once she heard yelling inside.
December 4, 2022 3:21pm

Rykle Morbius (played by scarellett)
Rykle Took a look around the place and then heard yelling and had her Pet Bat Fangs with her (Fangs the Bat)"where are we Rykle some kind of Lair of some sort"
December 4, 2022 4:12pm

Ahlam Valaide (played by CallMeCrazy)
He heard and smelled his landlord well before she addressed him. He was leaning forward in the doorway as he looked up at her. His damp hair dangled in his face obscuring his view of Maeve as she stood there spouting nonsense. Rolling those bright green eyes as he inhaled and exhaled even slower. Before pushing himself off the door frame and takes a step forward.

He towers over the smaller human looking down into her brown eyes as his opens his mouth for a retort but stops when he hears something else. “Who else is here? Did we get new roommates? Can I stop paying you rent? Where’s my hair products, and you look like you stole your clothes from a hipster working at the local Salvation Army” The string of questions spill from his mouth as he walks past her. A few long steps and he was in the living room. Looking at the large couches and kitchen.

“When did we get all this? How do you afford all this? Questions for later” Turning back around and marching towards the basement. Wanting to change. If they had guest he needed to be covered in DRIP.
December 4, 2022 4:16pm

Rykle Morbius (played by scarellett)
Rykle was very nervous but she had her pet bat with her to keep her Company
December 4, 2022 7:46pm

Seth McAllen (played by VoliminalVerse)
The army Ranger lacksidasiky walks in. He was eating from a bag of peanut MnMs. He poked his head in through the door and he stepped in still munching his candy. He had a HK G36C dangling from a one-point sling as well as a Sig P226 on his hip.
December 5, 2022 5:07am

Miss Fortune (played by -Rosebud-) Topic Starter
Things were seemingly getting livelier by the second, the very atmosphere beginning to change as more and more bodies piled into the building. Maeve eyed Ahlam wearily, “Friends of yours, or I’m just lucky today?”

Maeve took the moment to adjust her blazer jacket, unlooping one of the buttons lining the front so it didn't fit so snug. She cleared her throat, ready to be all business, or expecting that’s what strangers waltzed in for anyways. “Also, I know you’re not commenting on how I dress when you look like you raided the thrift store, the furs you buy are deplorable.”
December 5, 2022 7:07am

Ahlam Valaide (played by CallMeCrazy)
"I don't have any friends remember?" Spitting the words at Maeve as he sees the new faces and turns around to flop down on the couch. Grumbling as he adjusts his jacket to not let it get wrinkled, he grasps the remote as he turns the tv on. Finding the HBO Max app as he starts to browse through the movies pausing on Birds of Prey.

Miss Fortune (played by -Rosebud-) Topic Starter
"Well age must have left you colorblind, my hair is red." She shook her head, having half a mind to cut his subscriptions, maybe the boredom would kill him before she ever could.

Her hands clasped together, admiring the new faces that blessed the threshold of her home. "Welcome!" She cleared her throat for a moment, reiterating her little speech in her head. "Either you're here for business or you're here to rob me! Either way, I welcome you, more so I welcome you to try if it's the second option." It was her shot at humor, though it seemed to only get a rise out of her.

"Anyways, my name is Maeve Cordell, Hunter of the Supernatural at your service!"
December 5, 2022 7:13am

Rykle Morbius (played by scarellett)
Rykle was looking around in the house and had her pet bat on her shoulder
December 5, 2022 7:13am

Seth McAllen (played by VoliminalVerse)
He kept munching his candy as he walked around looking.
December 5, 2022 7:17am

Ahlam Valaide (played by CallMeCrazy)
"Thats right the other annoying person is blonde. Whatever Ya'll all look the same in the end. Also, I think they are ignoring you, and trying to rob you. You should stop them."

As he shakes his head and keeps going through the movies. Bored until he finds Adventure Time, and only putting it on for the sheer fact that it was loud.
December 5, 2022 7:21am

Rykle Morbius (played by scarellett)
Ahlam Valaide wrote:
"Thats right the other annoying person is blonde. Whatever Ya'll all look the same in the end. Also, I think they are ignoring you, and trying to rob you. You should stop them."

As he shakes his head and keeps going through the movies. Bored until he finds Adventure Time, and only putting it on for the sheer fact that it was loud.

Miss Fortune (played by -Rosebud-) Topic Starter
Maeve huffed, seeming a tad frustrated and bringing both hands up to rake through her hair. She needed a smoke, but she didn't want the smell in the house. Not like her Guard Dog was good for anything at the moment except for lounging on the couch.

"Some spooky vampire you are, Ahlam." She scoffed, crossing her arms over her chest. Her eyes wandered to Seth and Rykle, clearing her throat a bit louder than normal in an attempt to gauge their attention.
December 5, 2022 7:38am

Ahlam Valaide (played by CallMeCrazy)
" I'm not a spooky vampire I'm a pretty one. Jesus women what do you want me to do? Take the walking steroid's guns and tell the small child to make sure her bat doesn't make a mess?"

A deep exasperated groan rumbled from his mouth as he leans back. "I was not prepared for this day" As he sits up and looks at the two wandering new faces. Plastering on the most forced smile ever known to man and claps his hands together. The silent rage making them shake softly as he clears his throat to speak.

"Hello esteemed guest, and welcome to this self intitled hunter's home. Please be kind enough to introduce yourself, leave any and all weapons checked at the door. Know that if any pets make a mess in the house. I will regrettably be forced to feed you said mess through a straw. As you will be in a full body cast" As he turns his head towards Maeve and opens his hands gesturing as if to say. THERE HAPPY NOW?!
December 5, 2022 7:41am

Miss Fortune (played by -Rosebud-) Topic Starter
Maeve merely offered a short nod of her head, as a small "Very much so."

Granted his explanation was rash and a bit raunchy, but it usually got the job done, plus either these folks had business, or they just liked wandering into people's homes. Either way, this was probably going to be good.
December 5, 2022 7:58am

The Ranger would yell out "SORRY FOR TRESPASSING! PLEASE DON'T CALL THE COPS! I'M GONNA PISS OFF!"

With that, the soldier turned around and left.

You are on: Forums » General Roleplay » The Monster Hunter's Lair