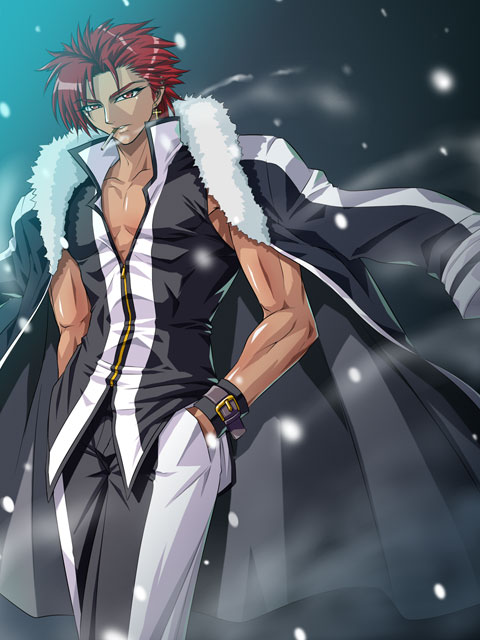 Lucius Maxwell is a traveling warrior that's seeking a challenge and helps those in need. He's also a Demi-God, so his smoking and drinking doesn't affect him. Lucius carries a katana, Lucifer that has been forged from the depths of Hell.

One day, Lucius was in a bar in a small desert town; enjoying a smoke and a drink when he heard a commotion coming from outside. "I wonder what's going on out there." He said as he finish his drink and walked outside.

Alicyia (played by Murkysoulwaters)
"Seriously, I told you that I killed that djinn myself! What's with you stupid boys for not believing me!" Alicyia snapped as she leaned on her staff, the retractable pieces already extended and ready for a fight. Not that it seemed that any of the people around her understood that. Sure, she was a pretty blonde girl, not exceptionally tall or buffed out, her hair almost cute-looking in its wavy ponytail. But she could hold her own and she proved it over and over again. Because a girl in a world like this needed to be able to.

Finally getting fed up, the young woman shoved past the rowdy crowd outside of the bar to see if at least the patron there who posted the bounty would accept her proof of kill. "Now, if you boys will excuse me, I've got important things to do!"
March 30, 2021 2:38am

Lucius Maxwell (played by TheScarletKing) Topic Starter
Lucius saw what happened and wanted to hear her story. "You killed a djinn all by yourself?" He asked her as he took a puff of his cigarette. "I heard those things are tough, but even more tough if you take them on by yourself. You must be pretty strong." Lucius commented as he extended his hand for a handshake. "My name is Lucius Maxwell." He introduced himself with a friendly smile.
March 30, 2021 10:25pm

Alicyia (played by Murkysoulwaters)
Alicyia frowned at the newcomer, though it was more of a pout at this point. "What? You don't believe me either? Or maybe you're just impressed?" She flashed a smile before finally snapping her staff back into its smaller segments and tucking it into her belt.

"Well, I won't say I'm the strongest out there or anything like that but I do have something most men don't," she added with a short chuckle, clearly quite pleased with herself. This guy too--he seemed interesting in a way most people she met didn't. The very thought of it left her making a split-second decision. "But hey. If you buy me dinner, I'll tell you how I did it, hm. Interested?"
March 30, 2021 11:37pm

Lucius Maxwell (played by TheScarletKing) Topic Starter
Lucius nodded as he led Alicyia into the bar. "I am impressed that you took on that djinn on your own." He said as he sat down by the table he was sitting at earlier.
March 31, 2021 10:23am

Alicyia (played by Murkysoulwaters)
Alicyia laughed as she sat down opposite of the other--did he say his name was Lucius? What a strange name. She wondered where he was from. Considering she missed the opportunity earlier, she thrust her hand out to shake now. "My name's Alicyia. I travel here and there and pick up bounties if there's something interesting. I doubt I've made much of a name for myself but hey, I guess I can now? As for the djinn..." she bit her lip, holding back for a little drama before finally saying, "I outsmarted it!"
April 1, 2021 3:01am

Lucius Maxwell (played by TheScarletKing) Topic Starter
Lucius chuckled as je ordered some food and drinks for them. "Really? That's very impressive!" He said as they shook hands. "So, tell why a girl like you is collecting these bounties?" Lucius asked. "I'm just being curious."
April 1, 2021 8:44am

Alicyia (played by Murkysoulwaters)
"It's alright. I don't mind curious people." If she did, Alicyia wouldn't be out and traveling the world or propositioning strange men to buy her dinner and talk about said adventures. "But I guess I seem like an odd choice for a bounty hunter, huh?" She shook her head, sending her ponytail dancing along her neck. For a second, her smile faltered and her hand reached for the bag at her waist, not noticing the instinctual action. "...Let's just say it's better than some alternatives. Plus, it's amazing that I'm good at it!"
April 1, 2021 9:19am

Lucius Maxwell (played by TheScarletKing) Topic Starter
Lucius nodded as he took a drink. "Sounds like an interesting job. I was thinking of being a bounty hunter myself. Maybe we could be a team together." He suggested.
April 1, 2021 10:13pm

Alicyia (played by Murkysoulwaters)
Alicyia let out an unbridled grin as if she hadn't been distracted by her thoughts just a second ago. That was all in the past anyway. No point in thinking about it now. "For real?! I could tell you were a fighter. I mean, just looking at you..." Her eyes flicked over Lucius' body before jumping back to his face. "But I don't mind teaming up. I think it could be fun if you don't mind hanging around with a girl!"
April 2, 2021 2:20am

Lucius Maxwell (played by TheScarletKing) Topic Starter
Lucius gave Alicyia a comforting smile. "I don't mind at all! I think we'll make a great team." He said as he finished his meal and drink. "One thing I need to tell you is that I'm not human. I'm a Demi-God." Lucius explained to her.
April 2, 2021 8:11am

Argon (played by DocTheB0t)
Argon strolled in, his hands behind his neck, a bit of blood on his shoulder. He walked over to the bar-maid, ordering a brew, sitting down. He seemed cold, unfriendly, and unapproachable. "Bleh.. This place only order's cheap booze and old stale food.." He murmured, tapping his foot as he waited for his drink.
April 2, 2021 9:34am

Alicyia (played by Murkysoulwaters)
Alicyia's eyes went wide before she leaned forward, her chin resting on the back of one hand. "No way. There's no such thing as gods! You're too full of yourself!" she exclaimed back. There was no way she came upon someone like a demi-god so she just laughed it off, though the sound came out short as someone new entered the bar. If her current companion was a clear fighter, then this guy was even more so. "Ick. What a creepy guy. I wonder if he's got a bounty on him." It wouldn't surprise her if he did. Standing up, she yelled across the bar's din. "Yo! You a good guy or a bad guy?!"
April 4, 2021 4:09am

Lucius Maxwell (played by TheScarletKing) Topic Starter
Lucius looked at this person. He felt a strange aura around him, but it was hard to figure out. "Alicyia. I think we should mind our business." He said as he took a drag from his cigarette.
April 6, 2021 11:10am

Alicyia (played by Murkysoulwaters)
Alicyia crossed her arms over her chest, clearly planning to argue. She didn't like being told what she should and should do, but...Lucius might have had a point. The guy wasn't someone to mess with so if he didn't have a bounty on him, she probably shouldn't make a stink. "If you say so. I'm just looking out for the greater good here." And her wallet. "Settling back in her seat, she was pleased to see the barmaid come back with some bowls of soup which she gratefully dug into. "You know, you've heard a bit about me, but I'm curious as to what you're doing in a little ole bar like this. If you're really a demi-god like you say, what are you doing here?"
April 7, 2021 3:11am

Lucius Maxwell (played by TheScarletKing) Topic Starter
Lucius didn't have long to think. "I'm a traveling warrior. Going to different places to find warriors or fighters that can prove to be a challenge." He replied. "It's been so long since someone has ever beaten me." Lucius said as he looked at his katana.
April 7, 2021 10:07am

Alicyia (played by Murkysoulwaters)
"Is that it?" Alicyia chuckled back. "No fine and lofty goals or desires to change the world? Just fight? What a 'man' think to say!" she laughed out. Honestly, it wasn't a bad thing though. As absurd as he was, Lucius was beginning to charm her. "Well, I don't think I could beat you in a fight so I don't plan to try."
April 7, 2021 10:53am

Lucius Maxwell (played by TheScarletKing) Topic Starter
Lucius chuckled with her. "There is that, but I'm also trying to find my father. My mother is human and he's a God. That's why I'm a Demi-God and I would like to see him at least once." He said as he stood up from his seat when heard Alicyia talking about not fight him. "Heh. Don't worry. I wasn't planning on fight my partner." Lucius smiled.
April 7, 2021 3:55pm

Alicyia (played by Murkysoulwaters)
That word 'partner' was really sounding nice to Alicyia. She'd been traveling for so long and enjoying it plenty but why was this the first time she realized that she longed to hear that word? A soft smile forming on her face, she offered Lucius the last of her bread roll as she stood up as well. "Hey, hey. That's a good thing to hear. I was worried about you getting bent out of shape but..." She paused, wrinkling her nose as she thought about what the demi-god had said. "It's fine and well to want to find your father but how do you plan to do that? Just wandering around is hardly a plan!"
April 8, 2021 1:53am

Lucius Maxwell (played by TheScarletKing) Topic Starter
Lucius nooded as he accepted the bread roll as he walked out of the bar. "Well. I have been finding some clues as to where I can find him, but I'm not sure how to use them." He replied as he took a bite from the bread roll.

You are on: Forums » General Roleplay » Traveling Warrior [Open]