Saturninum
explanation: see title (if you're scratching your head in confusion at what 'sapphic' means, it's a more inclusive alternative to lesbian that adds all femme identities, including enbies who want to identify with it, too)

sapphic characters are underrepresented in the rp community and i wanna see more of them. show me one. show me all of them. gib gib gib. bonus points if you gush to me about your character's girlfriend, i love that kind of stuff. i will go absolutely feral with you and we can all shout "OOGA BOOGA CUTE GIRLFRIENDS"


these are my main partners in crime, majima and kinoshita
i don't know what it is about these two that makes me go so feral. it's probably got something to do with the "literal goddess with infinite patience gets paired up with mentally deranged sewer rat" trope. i love them so much i wrote a book solely to give them more screen time

they literally bicker like old people couples at a retirement home but that's why i love them. it's kind of like if the most popular cheerleader in high school hooked up with the weird theatre kid that hisses and barks at people who walk by. hardcore extrovert who lives for the party versus crotchety hermit who just wants to play tron all day and eat samyang

look at them aren't they precious 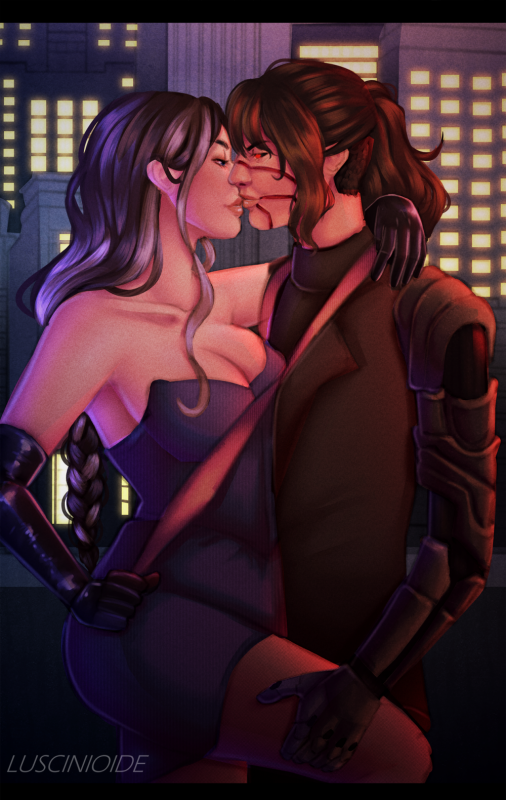 and then we have 'supervillain mastermind' and 'oblivious cinnamon roll
these two are really funny to me because i like to think miyake is completely oblivious to the fact her girlfriend is a literal supervillain. you know that meme that goes "someone will die. of fun!" yeah it's them.

i just enjoy the dynamic of "god complex defeated by one girl with a : D golden retriever personality that inspires supervillain to stop being a supervillain" okay

babies (art was done by the artist anruki) Katia
I don't have any, but I wanted to thank you for teaching me about the word Sapphic. I was actually thinking when I first read the title that maybe it was referring to seraphim.

If I may ask a quick question, do you know if umm gay women prefer the term lesbian or sapphic? No worries if you don't know, just figured it couldn't hurt to ask.
November 7, 2022 10:48pm

Saturninum Topic Starter
Katia wrote:
I don't have any, but I wanted to thank you for teaching me about the word Sapphic. I was actually thinking when I first read the title that maybe it was referring to seraphim.

If I may ask a quick question, do you know if umm gay women prefer the term lesbian or sapphic? No worries if you don't know, just figured it couldn't hurt to ask.

depends! lesbian is most commonly used by women exclusively attracted to other women. it doesn't typically get used to refer to bi/pan/etc women.

that's where sapphic comes into play. it covers a much broader spectrum and refers to anyone who identifies as femme/nb that has attraction to other femme/nb individuals, regardless of orientation. (so it includes the demographic that lesbian might exclude: bi/pan/etc). women loving women of any kind, essentially.

i tend to use sapphic for myself because i find it's a little more inclusive to my nb homies. that, and my gender identity can be best described as "confused". most people - at least in my experience - won't care if you use 'sapphic' and 'lesbian' synonymously, though. the majority of us will know what you mean.
November 8, 2022 7:48am

silentruth
First of all, your art is awesome, and your cute girlfriends ARE CUTE

I'm so excited to introduce you to my Iri.

This woman is hopeless.. she was raised a Samurai, blindly obedient soldier who was just lucky her brother is a fantasy HERO that she could follow into battle.

And then Mai Chun showed up. She had long straight hair, like a waterfall down to her waist, silver-white like starlight. She is so smart. Rose through the ranks at lightning speed, she was Iri's advisor, and took her place as general when Iri left the army. But lesbionest - she was the boss from day one. She had no patience for Iri's self-deprecating bullshit, but all the patience in the world to teach her things she never imagined. Iri read maps, strategy and logistics, but Mai Chun taught her poetry and calligraphy. She showed Iri a glimpse of what her life could've been like after the war, if she hadn't royally f'd it up.

So I play her in a Pathfinder campaign offline, set 40 years after the war. And last week one of the other PC's asked Iri for dating advice, and about Mai Chun, and she just...

"She just.. looked at me one day with disappointment about something I did, and I said without thinking..."I would rip Golarion in half for you". She laughed at me, and said she wanted many things from me, but nothing so violent. I'm sorry Nicodemus, I'm not much help. We never did anything you'd consider a date." 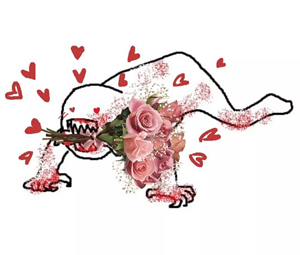 silentruth wrote:
but Mai Chun taught her poetry and calligraphy
i'm actually weak for "soft gf does soft things like read poetry to hardcore girlfriend with zero appreciation for the arts." i literally just finished a drawing with that exact premise last night loool
silentruth wrote:
"She just.. looked at me one day with disappointment about something I did, and I said without thinking..."I would rip Golarion in half for you". She laughed at me, and said she wanted many things from me, but nothing so violent. I'm sorry Nicodemus, I'm not much help. We never did anything you'd consider a date."
such a shame. real girl bosses take their gf out on a first date of ripping their arch nemeses in half with their bare hands 😔
November 8, 2022 8:52pm

silentruth
Saturninum wrote:
such a shame. real girl bosses take their gf out on a first date of ripping their arch nemeses in half with their bare hands 😔
If it makes you feel any better, Iri's about to get into a new relationship, who would absolutely take her out to murder their nemeses on their first date. And when Mai Chun shows up, in the campaign they're gonna have fuuuuun. Well I am anyway.
November 9, 2022 3:03am

Harmony Jay (played anonymously)
Not sure how well this counts, but...

Even though this girl is aromantic pansexual and has internalized homophobia to work through, I keep wanting to get her a girlfriend. And then she'd have to figure out how to either maintain a monogamous relationship when everyone is hot, or additionally come to terms with polyamory also being okay.

So far, there's been one RP were she hooked up with someone. It was mostly based on the other character (who I'll mention was a guy) being someone she knew really well and trusted on top of being hot, but she got super excited when she found out that he was both able to and completely cool with basically shapeshifting to have different appearances on occasion, as well as the female variation of the guy's own appearance still being hot. They weren't necessarily an ideal couple (mostly because they could both be real dumb sometimes, and Harmony tends to be a difficult little brat who needs a lot of patience to handle), but they made things work out pretty well, overall.
November 9, 2022 12:40pm

The L'avarians (played by RoundTableKing)
They don't really have their own page or character sheet, but I have a cleric named Telrelihya Vladisnova, who is an absolute slavic drug fiend and absolutely a homosexual. Unfortunately for her she was involved in a particularly nasty sieges where she was one of the only survivors.

She was rewarded for her efforts by being removed from active military service, but now she just kind of roams the frozen streets of the fortress cities getting drunk and constantly trying to deal with her PTSD and trauma after watching her entire guard/cleric company got slaughtered. Unfortunately the orthodoxy does not care enough to actually give them therapy. It's easier to just hand out alcohol.
November 10, 2022 12:27am

Addi (played by Faedreamer)
All of my characters are a little gay (well, excluding non-humanoids and the ones who I've just never defined their sexuality) but, hey, here's Addi. She's part of a collaborative worldbuilding project I share with GingerHades who also happens to play Addi's girlfriend, Mixie. Maybe she'll post here and talk about her, too. Or maybe not.
Essentially, these two used to be humans, but one day they were dumb and ate the spooky demon fruit, and it turned them into Fiends, which are.. basically demons. So these two met a little while after their transformation. They were going to (attempt to) kill each other before realizing that they were both in the same boat (Fiends are quite uncommon in this world, so it was a shock to both of them when they met.) This quickly lead to friendship, and then eventually romance.
They're girlfriends. They're Fiends. They're the Girlfiends.
Together they live in a random abandoned house that they found and cleaned up. They enjoy committing acts of violence together. The epitome of 'be gay, do crime'. They also adopted a child.

More on Addi specifically... She swears all the time, and her two favourite things are bullying people and eating fried chicken. She's tall and her gf is tiny, so Addi carries Mixie around a lot.
They're an adorable couple, in a weird, horrifying sort of way.
PS: I may come back to talk about more of my gays later but I'm real tired rn
November 10, 2022 12:52am

Violaine (played by fig)
here she is. big miss steak

vi is pretty aro/ace or grey-aro grey-ace in my brain, but if she ever were to be attracted to anyone, it'd be a woman and she would get. so flustered... and bothered by her sudden Human Emotions and worried. which is very unusual for her, she sort of has this blind arrogance that isn't really shakeable. but a strong, pretty lady would most definitely shake her up
November 11, 2022 12:08pm

Rain predicted the future, I'm here now to talk about my own gay murder demon

So Mixie's situation was already somewhat-explained by Rain; she used to be human, until she ate the fruit of the Underworld. Then she went cuckoo and it was all downhill from there.
Her hobbies include playing the guitar, painting, going on hikes, biting people's heads off, and eating just about anything that falls under the 'food' category. (Which includes humans.)

She might be a terrible person, but hey, she's a good girlfriend! Mixie and Addi might have some, er, questionable morals, but they both treat each other incredibly well and are always there for each other. They're also good to their kid, Miko. Now they live out in the middle of nowhere as one little happy family who all love each other

So yeah, Mixie and Addi take "BE GAY DO CRIME" to a whole new level and I really enjoy seeing them both in RP

Catastrophie
All my characters are firmly in the wlw category, but a fun pairing I've played with my wife is Mone and Sunne. The moon and sun are ladies and they're in love 🥰

You are on: Forums » RP Discussion » show me ur sapphic characters