Shes known as the Cursed Marauder and while her history somewhat alternates the history of some of the characters in the universe shes a joy to play.

Her curse is the product of jealousy and shes a character that introduces a darkness into roleplay.

Shes actually the mother of the character I have for the Harry Potter timeline.

Shes sweet, caring, has an aptitude for magical creatures but certainly has the potential to be a villain if the darkness inside of her wins.

Anyway, shes one of my joy's. Besides, playing the Marauders era is always good fun.

Jack Splatter (played by dssieri)
Jack splatter is probably my most complete character and my Favorite.

He is a serial killer who a very rough past, resulting In the rush of killing being his only source. Though he prefers to keep himself distanced, he is capable of love. The he doesn't want to be a killer, he Is sometimes forced by higher ups to continue what he hates, but its also saving him at the same time.

1st Sgt Chris Silas (played anonymously)
I’ll showcase my somewhat modern soldier Sgt Chris Silas. He’s a veteran of Iraq and Afghanistan, and is currently with his unit in Syria. I tied in my other character Lt Steve Harrison by having him assigned to Sgt Silas's unit.
November 21, 2019 4:42pm

Catriona Emberweaver (played by MercyInReach)
My newest baby, Catriona, Princessx elf. Trying to figure her back-story out at the moment and get a lfrp up.
November 22, 2019 3:48am

To be fair, as of now, there's not much relevant/coherent information on her profile because my stupid ass decided it would be a good idea to try and revamp her profile at 2am- resulting in it being incomplete due to passing out

Lucky Arcanehum (played by BleedingPascal)
Lucky is one of my first human OCs. In her first version, she was a royal guard dragon hybrid. Now I made a modern version of her, and she is a policewoman. She is one of my personal favourite OCs. More info about her on her profile. I love doing romance roleplays with her.

Some things about her :
• she has mechanical arms. She lost her real arms when she was a slave.
• She is bisexual and has never fell in love before.
• It’s hard for her to trust others, and she doesn’t like talking to people.
• She Hates human contact, due to her PTSD.
• She alway thinks someone is out to get her.
• She can’t read or write.
November 24, 2019 10:20am

Sylvanus Tadala (played by ChebaBeesting)
Sylvanus is the only character I have who is meant to be for Guild Wars 2 roleplays. But since I hadn't started any I use him for fantasy ones. He isn't fleshed out like my other two characters but I hope that will change in the future, and he's also WIP, like the other two. So, here are a bit of things about him:

-It is unknown how he lost his parents when he was a child, but a mercenary took him in

-He has a raptor named Malphis whom likes to tease him and is playful, Malphis is a horse in fantasy roleplays

Caila Dunn (played by Deumeawyn)
I’ll show off Caila as I try and develop her for this site. She was created on another site and had a deep rp with Wordsmith’s John Seaman there. Trying to get the feel of the character and story back after a year hiatus.
November 24, 2019 5:30pm

Musette (played by Lumaslily)
This character was once a carbon copy of another character from a video game until I decided to try and be original. The backstory was supposed to be five paragraphs long, but I ended up writing three extra paragraphs. Welp, at I finished something!

Shortest Lycan (played by Winters_Fury)
Theodwin is my most recent OC I've created. 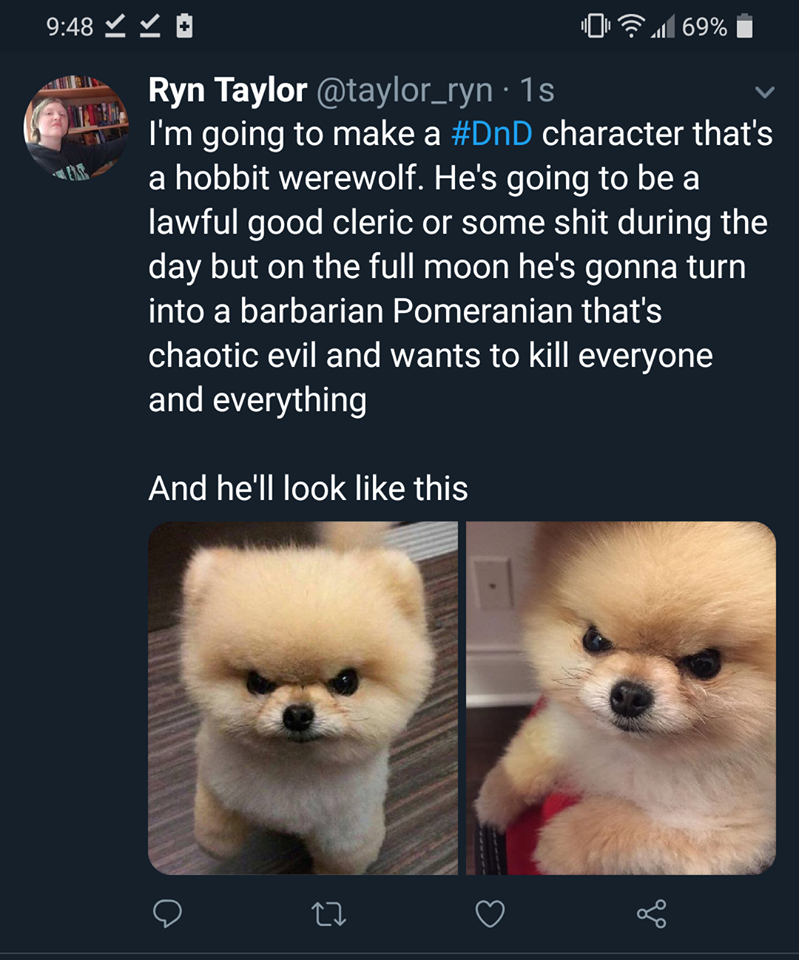 I knew I had to make an OC using this as a suggestion. So here we are Ladies, Gents, and others. A hobbit/lycan OC that is also the shortest lycan known! At least in my writing he is the shortest one known. ^-^
December 21, 2019 6:59pm

Siira Feir-Sil (played by Voldarian_Empire)
Siira was my first character on rpr, but since 2.0 came out I've completely redone her profile. A few things need some final tweaking I think but overall I'm happy with how it all turned out!
December 21, 2019 8:22pm

Msizi Van Rooyen (played anonymously)
This is one of those characters that came together in a day or two. I still have some pieces to work out on the abilities, but I am pretty stoked for the build.
December 21, 2019 8:40pm

Monique Couture (played by Deumeawyn)
I haven't shown off my bookstore owner Monique! I was inspired by Lavena a character idea I had for some time and tenetively tried out on another site a couple years ago. She is defintely being refined as I go and get some RPs written with her! Here is her LFRP thread.
December 21, 2019 8:40pm

Monique Couture (played by Deumeawyn)
I haven't shown off my bookstore owner Monique! I was inspired by Lavena to bring a character idea I had for some time and tenetively tried out on another site a couple years ago here to RPR. She is defintely being refined as I go and get some RPs written with her! Here is her LFRP thread.