Padraec (played by WinterBlackDraoi)
I have to show off Padraec. He's sweet and very lonely, he needs a hug.
April 7, 2020 8:49pm

Sandy Hill (played by Rogue-Scribe)
This hippy mama is really enjoying life! She has two daughters who were born quite a number of years apart.

Lucedio (played anonymously)
"Well, what do we have here? A little show-off, I see." Lucedio wiped away the blood from his face as he smirked at the people below. He was curious, interested. He wanted to join the fun...or maybe he wanted...something else.
April 10, 2020 11:51pm

mao saotome (played by haneulseongie)
Someone please roleplay with my new baby Mao. She is neko, but still needs love.
April 11, 2020 10:26am

Elide Hofer (played by vlpingree)
Elide Hofer is a determined young girl fighting for a better reality for her country and its people. She is very passionate about her goals and ambitions, and sometimes makes rash and risky decisions to achieve them. She may also tend to come off cold because of the sheer intensity of her willpower. The rich heiress knows almost everything about everyone, and tends to use blackmail against her enemies to make them do her bidding. She is a well-known assassin of the rich and corrupt, using her gray morality to better her homeland of Austria.

I haven't gotten the chance to use my newest character in a roleplay yet, so if you're interested, please PM me! I roleplay in 3rd person with usually about two paragraphs, but of course length varies with the roleplay.
April 11, 2020 4:55pm

Maeve Penumbra (played by koobler)
maeve is a maid who seems far too disconnected for her own good, but still does her job with a lot of style. i haven't done much rping with her, but love her all the same.

Tolkien Auber (played by Spikycactii)
Couldn't help but give this lovely forum a bump. Y'alls characters are so neat! I love hearing about all the personalities.
Here's one of my long-time favorite charas: Tolkien Auber! Although a large shape-shifting dragon, he's a bit timid and clingy.
April 21, 2020 11:40am

Princess Annabelle (played by Aggy1231)
This is my princess character Annabelle! I haven't had the chance to get a proper rp with her but because she is a little underdeveloped since I make them through rpig with them, she is pretty flexible with what I can do with her!
April 24, 2020 3:10am

1st Sgt Chris Silas (played by Rogue-Scribe)
One of my soldier characters. Sgt Silas has had a rocky career but is a good leader of men. He has served in Iraq, Afghanistan, and Syria. He is currently under investigation for having his men leave booby traps in the area of their old base when the current president ordered them to withdraw and abandon their Kurdish allies. When the Turks came in, they had a rough time occupying the old base. They ended up returning to their base in Kandahar Afghanistan.

He is currently in a good rp with a Captain character and another sgt character along with Lt Steve Harrison and they both will be writing more After Action Reports.
May 1, 2020 5:42am

Bessie Billie Armstrong (played by LakotaSiouxWarrior)
My blues singer a tribute to Billie holiday and Bessie Smith.
May 1, 2020 10:20am

Zelestina Krest (played anonymously)
"Mess with my children, you mess with me..." She glares at you with her luminescent purple eyes.
May 1, 2020 10:51pm

Alice Creed (played by xbittersweet)
Alice is a sly troublemaker who enjoys creating chaos.. but.. she’s affectionate, and once you gain her friendship, be prepared for a long and bumpy ride.
May 2, 2020 9:17am

Lisa Nicole Forrest (played by LakotaSiouxWarrior)
A totally professional soldier doing a tour of duty in Afghanistan.
May 5, 2020 1:53am

Warrior with the great spirit (played by LakotaSiouxWarrior)
My sioux medicine woman.
May 19, 2020 6:58am

Raelle Collar (played by WayAngel)
This is Raelle Collar. She's an Army witch and protects those she's closest to. She's great at healing people, and is learning to master that power so she doesn't take on the injuries of those she heals. She's a quick study and may be timid when she first meets new people. She has to grow to trust those she's meets and it's not something she does lightly.
May 19, 2020 8:51am

Pwent Thibbledorf (played anonymously)
A dwarf turned vampire. Still trying to figure out how this whole vampirism thing works, but it turns out he can still do most of the things he liked doing in life, like killing goblins, orcs, giants, drow, humans that forget their place.. actually turns out becoming a vampire helps your killing ability immensely!

Not tolerating the sun is annoying, but as a dwarf he preferred being underground anyway. Really, being a vampire might not be so bad.

If he could just do something about this incessant urge for drinking blood.. and drinking goblin blood isn’t really cutting it either... how annoying...
May 20, 2020 6:29am

Haruka Saigo (played anonymously)
I want you to meet my new baby girl... Haruka Saigo. I really enjoyed making her. Please check her out!
May 21, 2020 5:10am

nindyaru
This is my characters from their main universe version

I am still too lazy to write their profiles here so I just drew them. currently there are only alt.version of Love, Hari and Gilang on my character list here.

Gilang, Hari, Seta and Risa in their high school uniform. All of them are Indonesian and actually characters for my comic plan about demons and other supernatural beings from Indonesian folk stories. 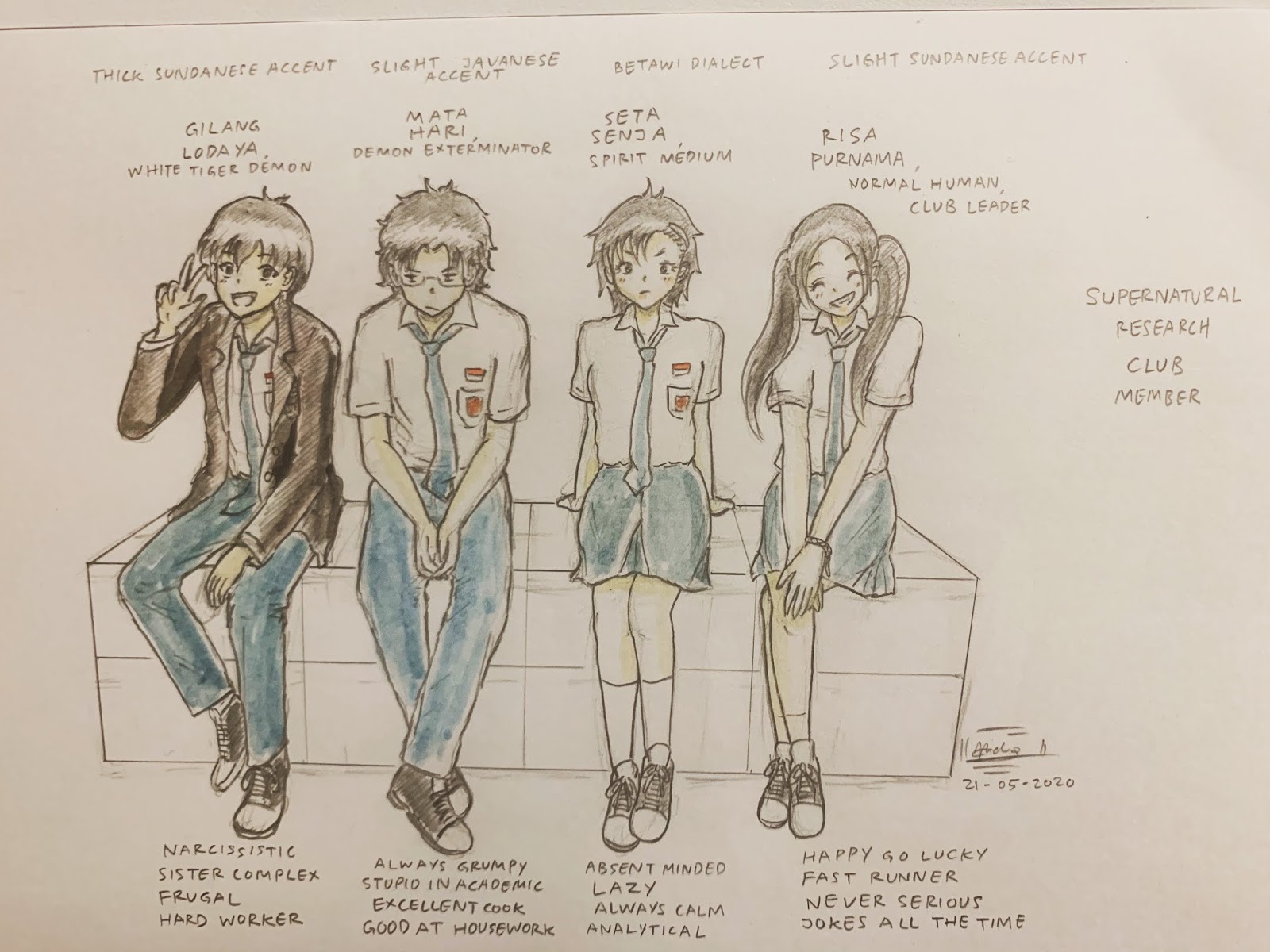