Siira Feir-Sil (played by Voldarian_Empire)
Just finished rebuilding Siira's character page, and while there are still some minor alterations and additions that I may make to the 'Enrezla' page, the rest of it has been completed.

Siira has a wonderful love story across the galaxy centered on reuniting her family after being labeled a traitor for who she fell in love with (and consequently had a child with). She adventures through the galaxy in search of her beloved, and waiting/looking for the opportunity to rescue her daughter from her own people before she's discovered and most certainly put to death, a consequence Siira herself would suffer if she was caught by them as well.

Narisi Nueva (played by SylOfficial)
This is my main OC and the MC of the fantasy novel I'm writing on wattpad. I used to roleplay with her and now brought a younger version on here because I missed using her for roleplay ^w^
April 17, 2019 7:57am

Jules Geist (played by SeaWarriorRachel)
She is one of the first characters I have ever made.
She's the Demon Queen and the Ruler of the Underworld. This being said she isn't necessarily bad unless she needs to lay down the law or someone goes after her loved ones. She is pretty blunt and clueless when it comes to human things. She has many powers but doesn't go overboard when using them in most battles. She has been around for too many years for her to remember and still recalls when she was human. Theres more about her but this would be extremely long if I continued.
April 19, 2019 2:00pm

The Vixens (played by 8_Stars_8)
Oh gee, I'm actually really proud of this so far...

Athene (played by akula2ssn)
Oh Why not. Still in the early stages, but she's been a character that's been in my mind for years. Finally taking the time to put things to paper and try to flesh out her story and who she is.
April 21, 2019 12:18pm

Ragna Kamui (played by RimCaster)
Ragna is one of my first female characters done right. She's gone through some hardships and adventures in life, her concept been around since 2016 although official works on her were made in June/August 2018
May 10, 2019 7:45pm

Rolf Steiner (played anonymously)
Steiner here is a historical RP character I created sometime toward the end of last century for a wargaming-rp I was in. He was based on the main character in the book The Willing Flesh by Willi Heinrich, Johann Schwerdfeger. Names were changed in the English printing of the book, and in 1977, a movie was made based on the book called Cross of Iron and the main character's name was changed to Rolf Steiner (brilliantly played by actor James Coburn)

He is in one RP here with Madeleine Sabine Belmont and has been in another extensive one on another site about ten years ago that covered his later history from the time of the Normandy invasion of 1944 to his death. I managed to save that RP and I posted it on Rolf's profile and there is a thread in the Art and Creativity forum., but it was mostly lost due to a board crash and destruction.

Jamison (played anonymously)
i’m really proud of how far i’ve come with jamison here; he’s changed a lot over the past year-ish that i’ve had him, and i’ve gone from avoiding writing him due to my uncertainty, to writing him as much as i can because he’s a blast lmao. i’ve put a lot of thought into developing him and he’s quickly become one of my all-time favorite OCs. for me, jamison also kind of represents this? shift?? i’ve gone through over the past year, mainly in writing but in all areas of my life tbh. i’ve gotten a lot more confident, have ventured out of my comfort zone more, have made a lot of friends, and i’ve just become an overall more outgoing and confident person, more than i’ve ever been. i’m very happy with my life right now and the small steps have brought me here— like writing jamison more often despite my discomfort and uncertainty because i was afraid i wouldn’t be able to portray him well.

on a less deep note though, i love all his quirks and just exploring the way he views life. i honestly think he’s one of my most complex characters; he’s full of dumb antics, a lot of smirking, and a lot of cockiness, but underneath the surface there really is a lot of turmoil that he has absolutely no idea how to deal with.
May 12, 2019 8:56pm

Firenwoerc Deofol (played by Crystaldragon126)
Firenweorc is one of my oldest OCs, and has definitely changed the most! I’m still working on rewriting his backstory, but he’s the first character I ever wrote that had a mental illness. It’s hard to figure out but I’m slowly working at it!

Zyxarekti (played by Riik)
More recently, I've been experimenting with unusual/alien characters with unusual anatomical features; and whilst I find those characters very interesting to design and create, they don't seem to attract a lot of attention. I mean it's probably understandable... human and human-adjacent characters are bound to be significantly more popular; but that doesn't stop me from trying. Plus no doubt a lot of people would find a lot of said features to be too weird for them.

Zyxa here is more-or-less a prime example of the fact that I find it really difficult to get hyped over creating a character that doesn't in some way have cutesy features. I make a mischievous and destructive demonic entity, only to give him a cute face.

I think the biggest thing I like about Zyxa though is his personality. In many ways, he's the opposite of me - he's loud, outgoing, careless and tricksy. He's not the first character I've made that's outside of my default 'good-guy' position - that reward probably goes to Deril - but he's probably the most extreme. Through Deril I've gotten a fondness for more chaotic/neutral characters as they have so much more personality to them, even though they're more morally dubious.

I still haven't had a chance to give him a try (he doesn't exactly fit into the more popular tropes of this site), so his development is far from complete; but I like that he adds colour and vibrancy to my increasingly diverse selection of characters.
May 17, 2019 9:43am

Liam Eberett (played by KokichiLove)
This is Liam. He has been involved in many different settings as a prince, a servant for a prince, and many more. He is a character in a book I’m writing (that is nowhere near finished). In roleplays I use him for realistic settings.

He is gay, and very much the bottom role. He’s very timid and shy at first, for reasons he doesn’t like to talk about. He likes to be close to his partner and craves affection from him. Once he opens up to his partner he is very loyal, but secretly gets very scared his partner will leave him, so he tries to fit into his partners “ideals”, even when they’re out of character for him
May 18, 2019 4:54am

Halasian (played anonymously)
I don’t think I’ve shown off Halasian, my longest-running character. He got his start in the ‘Shadow Over Arnor’ RP over on The One Ring back in 2000. His story is quite well developed and his days in Middle Earth have come to an end with his son Hanasian taking up the mantle. I sort of resurrected him here for an unfinished rp from another board but it didn’t last long here. He’s an old ranger warhorse.
May 18, 2019 7:51am

Ivphion (played by DarkCrow)
Going to show off Ivphion here cause I really love her aesthetic.
I'm sure taking a 'darker' image for a life-god isn't a new concept, but I still feel like she's unique regardless and I really like her.

Olivia Elizabeth Brice (played by Rigormortiful)
Olivia is taking up majority of my muse lately. She’s intense with some unexpected soft spots. (,:
May 18, 2019 9:53am

Efficacious (played by Dndmama)
*gasp* I just remade Effy and I love her so much and you should love her too cause she's the best and she loves you! Loves and hugs and rainbows and tragic backstories for all!

Cyrillia Stein-Seto (played anonymously)
I recently made Cyrillia, and she rather makes me happy. The time I spent finishing up her profile was just so great. I never realized how much I liked military themes until I decided to try this. Of course, I had even more fun drawing her art. Since she’s rather athletic, I’ve had the honour of trying to draw more unique poses, at least for me anyways. 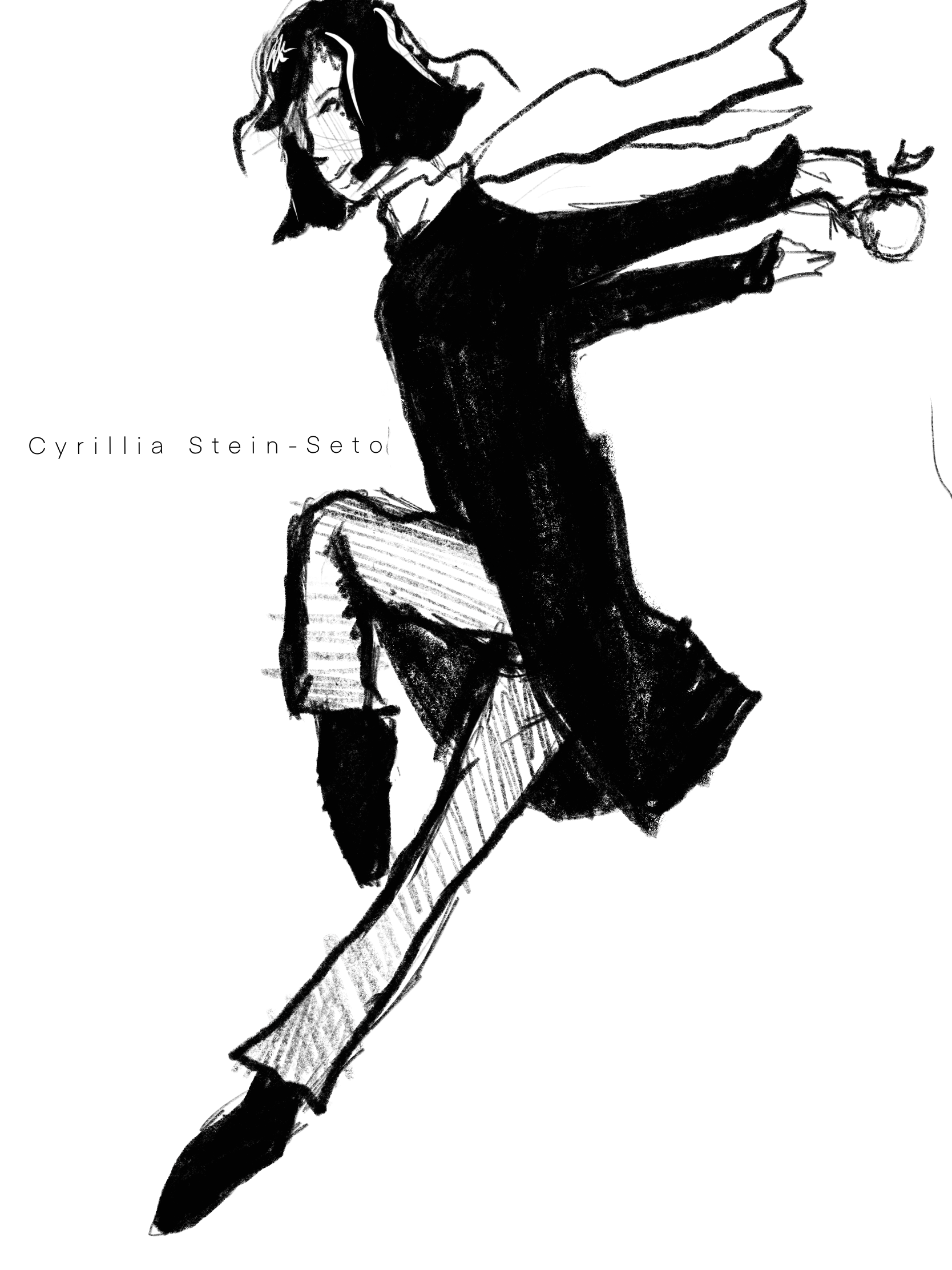 Z'jînn Ka'fs Sæxð (played by Demilicious)
Efficacious wrote:
*gasp* I just remade Effy and I love her so much and you should love her too cause she's the best and she loves you! Loves and hugs and rainbows and tragic backstories for all!

*disclaimer-character page still under construction but it's so pretty!*

In a weird contrast, I was gonna show off my beloved awkward, sado-masochist Z'jînn. Though I feel the urge to warn that he is labelled for all the adult content. Nothing overtly sexual, so do not be worried, and no swearing, but I like to be overly cautious. I hope you all enjoy him, those that do read. He is forever a work in progress, like most of our beautiful children are, since their stories are always growing.

Carmen 'Bloodshot' A (played by MercyInReach)
Carmen is new, badass and I hope she finds someone to love her and can put up with her because mannnn 😍😍😍