Francis (played anonymously)
Francis is anon, however someone is bound to recognize my drawing style. Which isn't all too upsetting, I guess.

Initially a journalist who comes with a team of archaeologists do document their journey and findings, Francis suddenly gets taken as a slave by a society of Naga who lives underground in ancient Mayan ruins. Naturally, he struggles with accepting his new designated social status as a fancy accessory. 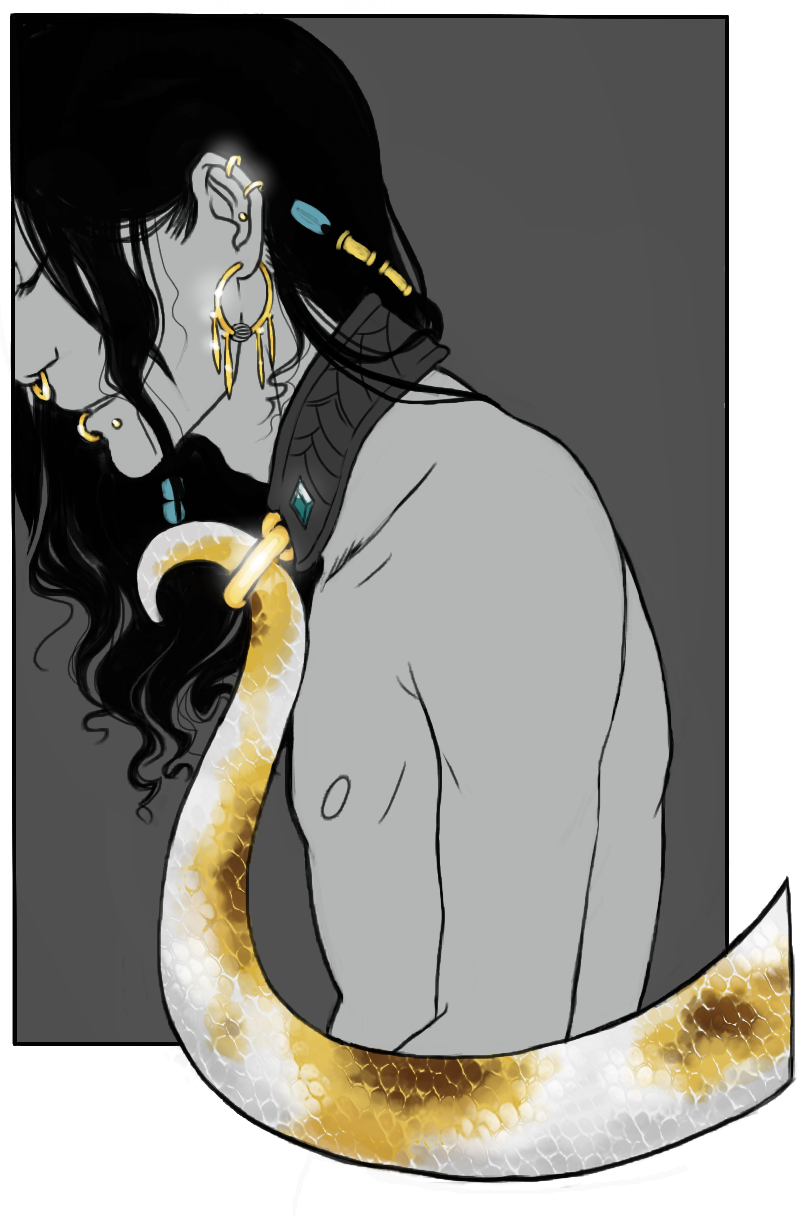 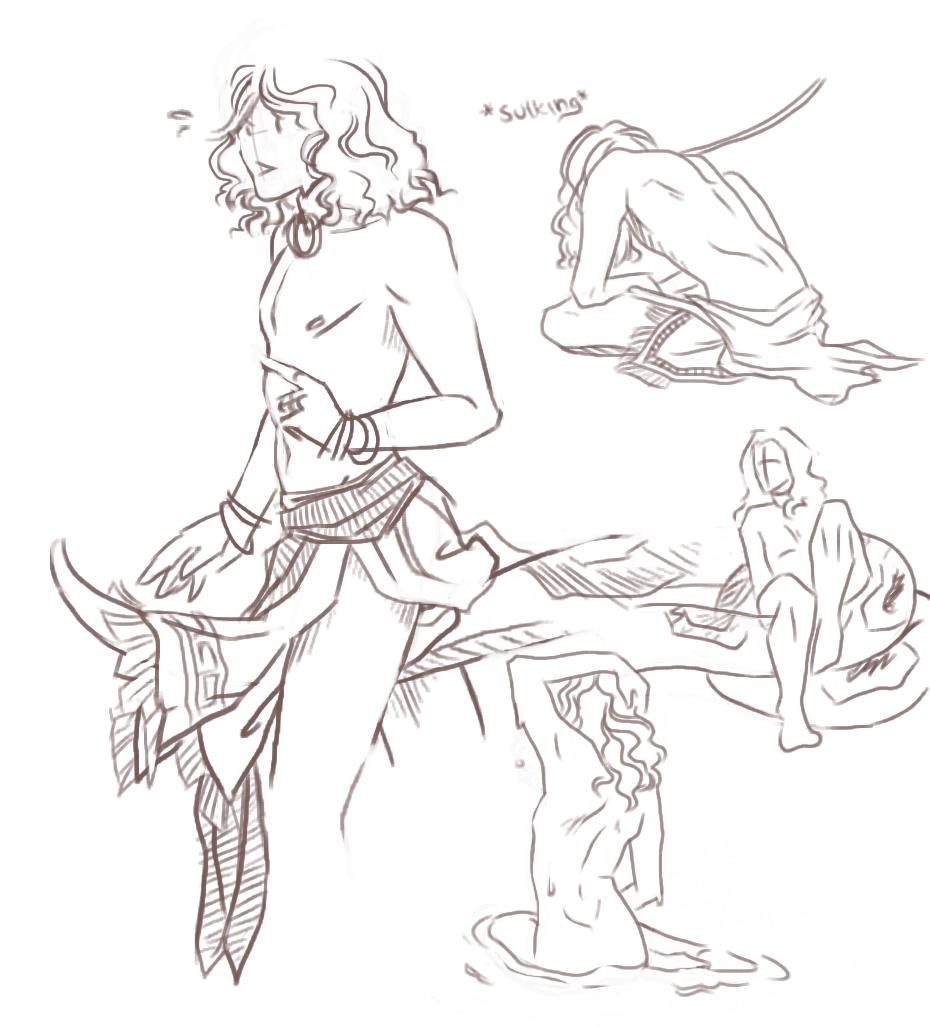 Melissa Plentok (played by Orrik_Zynn_x2)
My best sci-fi character. Missy here has...one insanely harsh past but yeah. I made her during one of my worst days...

Anyways! She's super detailed and her profile is complete (unlike most of my characters due to my lack of motivation...) and fun fact: She's completely blind BUT she has a super high tech visor that's sorta implanted over her eyes that let's her see...even if everything she sees is in an ultraviolet tint. (basically everything she sees is purple!) This visor can be lifted to reveal her eyes but she hardly ever does this.

Esther (played anonymously)
So while I really like Ira (and a lot of people seem to like him), I'm really proud of Esther's concept.

With vague mythological influence, she is one of four (now three) immortal siblings who guide people through various aspects of life. She is the Guide of Lost Souls, helping those who have lost their way find it. Because of this, she spends a lot of time in places that aren't quite as nice as the Hills, let's just say. She has this shape-shifting ability that I really like where her appearance and voice changes depending on who she's helping.

I feel like she could be really fun to RP as a supporting character to other's stories until she gets fed up, wanting her own story for once. Also, she's really cute and pretty much the only truly short character I have because I am tall and Do Not Understand how short people live.

Finn O'Hara (played by Lanx12)
Finn here is one of my best. The fact is when you start a story with him you not only get the former assassin but also he cute daughter Naomi! As it is he is one of two characters that I do multi characters with. But...Finn has more history to him. If you look around his pages you’ll see details about his past and how well life isn’t easy. Including being a single parent who has a troubled past. But through and through this father daughter duo really melts my heart and from the few players who have dared to take Finn and Naomi on I hope so too.
May 19, 2019 10:45am

Bessie Billie Armstrong (played by LakotaSiouxWarrior)
My blues singer from Chicago with her teenage daughter. She's Billie holiday and Bessie Smith. Plus Robert Johnson all put together.
May 19, 2019 6:13pm

Lull (played by kroweling)
pardon a bit of WIP dust on this one! viva is a revamped version of an old oc, back from the dead (literally and figuratively).
May 23, 2019 5:08pm

Jessica Saraiva (played anonymously)
I’ll show myself off as I’m a bit of a narcissist. I had to be the center of attention at my old school and was darn good at it.

But my move across country from New England to California to live with my dad and having to go to a new high school my senior year sort of had me needing to work at getting myself re-established.

I’m not as bad as I was as I seem to be finding different sorts of friendships now that I’m not with the same people I grew up and went through school with. That and my New England accent definitely has me stamped as not being from around here.

Cecelia (played by Yersinia)
I tuned up this sawbones swamp doctor's profile recently. She's an adapted version of a D&D character. I haven't gotten around to using her in paragraph roleplays, but she tends to 'write herself' (I always know how she would respond to things without having to think about them much), so I'm hoping to give it a try in the future. When I write for her I also get to write for the sentient bog mummy that lives under her porch lmao.
May 24, 2019 9:39pm

John Roby (played anonymously)
John here was created yesterday in honour of my cousin. I think about him when Memorial Day comes along. John Roby was a casualty in the Vietnam War. I've been working with his sisters to catalogue everything that is available about their beloved brother. There are some beautiful rememberences on this memorial page. I also have a 'Notes of Honor' page on John Roby's profile that has all the links we have found on John and the battles he was involved in, including a picture of him in the field.

I always get a bit emotional when talking about my cousin John. I have some memories of him but they are few and far between. The last one was when he and another cousin visited the house before they both shipped out to Vietnam.
Rest in Peace Johnny - Forever Young
May 25, 2019 11:30pm

Captain Jacqueline Sparrow (played by LakotaSiouxWarrior)
One of my all time favorites to roleplay. Jack sparrows daughter it's fun playing a pirate and she is frisky feisty rum drinking pirate.
May 25, 2019 11:51pm

Cherry (played by MercyInReach)
Cherry! She's very dynamic and secretly (shh) from a mafia family. I love her and I am desperate to rp with her.
May 26, 2019 2:24am

Bluebell 'Blue' Carter (played by Sunflower)
this is my baby, Bluebell. she’s the oldest character I have and definitely the most developed. she’s australian and loves margarita pizza!
May 29, 2019 4:23pm

Spike (played by KokichiLove)
Spike is 8 years old, and is half-human half-beast. He is a failed science experiment taken into the lab as an infant. I say failed because they accidentally made him too powerful and too aggressive, and too beast-like. He spends most of his time in a solitary confinement portion of the lab because he tends to bite when he's upset or scared, and his bites are toxic enough to kill someone within minutes. He acts very hostile, but really he's just a scared child who wants the right person to come along and be his friend.
June 8, 2019 6:42pm

Dunhama (played anonymously)
Thought I'd show off my Middle Earth character Dunhama here. He's been in a Lord of the Rings RP first on the Arwen Undomiel site, then here. He is about to be retired though as the writer who he had been RPng has lined themselves out. He will go into a collective character I am making for my Middle Earth characters. I'll condense their character pages into one page.
July 8, 2019 11:07pm

Carlos Santo (played anonymously)
Carlos was my Spanish fashion designer I created for a specific roleplay that has since been written to a conclusion. I was thinking of re-inventing him as he hasn't been too successful getting an RP to stick since.
July 8, 2019 11:30pm

). Lady Z is a former villainous henchperson trying to turn hero in the wake of her boss' betrayal. She's like Harley meets Zatanna meets the thieves from Now You See Me! Fun and perky and always has a trick up her sleeve! But can she make it on the other side? Or will she fall into old habits once more?

Dealt (played by Dharlas)
Demon lord of wind and chaos, caster of illusions and maker of deals! He can make any wish come true, for a price of course!

For a demon he is wonderfully human, and as I get to play him I learn how unstable and hurt the eons have made him. Was originally made for The Golden Tether on Furcadia, but have brought him here for good now. He is an absolute powerhouse who only seeks to own everything he can, but that is the only way he knows to show his love.